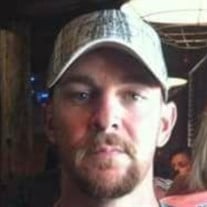 Jason Howard Winfrey, 44, of Muskogee, OK was born November 6, 1976 in Oklahoma City, OK to Bryce and Clara (Carter) Winfrey and passed away on Thursday, December 3, 2020 in Muskogee. He received his formal education at McAlester Schools, later receiving his GED, which he worked very hard for and was proud of. Jason met and later married the love of his life, Jamie Cregan. Together they had 26 years of precious memories and 14 years of marriage. Jason loved the Green Bay Packers, playing football with his kids, collecting knives, crosses, playing with the family dogs, Minka and Bella, but most of all he loved spending time with his family and friends which he loved unconditionally. Jason’s first battle with cancer was in March of 2018, he went into remission May of 2019. July 2020 was the start of his second battle of cancer. He will always be remembered as a devoted husband, father and friend and will be missed by all that knew him. His memory will be cherished for a lifetime. Jason is lovingly survived by his wife, Jamie of the home; daughters, Paige Winfrey of McAlester, OK; and Abby Cregan of Muskogee, OK; sons, Jaelon Winfrey and Drake Winfrey both of Muskogee, OK; and soon grandson, Nolan Jay; brother in laws, Jeffrey Cregan and James Cregan II both of McAlester, OK; and father-in-law, James Cregan of Norman, OK. He was preceded in death by his mother-in-law, Janet Cregan of McAlester, OK; and sister-in-law, Tracy Palmer of Lebanon, MO. A memorial service celebrating Jason’s life will be held at a later date. The family of Jason Howard Winfrey has entrusted his cremation to Clifford D Garrett Family Funeral Home, Fort Gibson, OK. 918-478-2555. Online condolences may be left at clifforddgarrettfamilyfh.com

Jason Howard Winfrey, 44, of Muskogee, OK was born November 6, 1976 in Oklahoma City, OK to Bryce and Clara (Carter) Winfrey and passed away on Thursday, December 3, 2020 in Muskogee. He received his formal education at McAlester Schools, later... View Obituary & Service Information

The family of Jason Howard Winfrey created this Life Tributes page to make it easy to share your memories.

Send flowers to the Winfrey family.