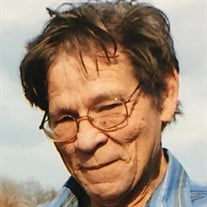 Jasper Charlie Young, 71, a lifelong Fort Gibson resident was born March 29, 1946 in Tahlequah, Oklahoma to Jasper L. and Ida Ellen (Gates) Young and passed away peacefully Thursday, September 28, 2017 at his home in Fort Gibson with his loving family by his side. Jasper, who preferred to go by J.C., graduated from Fort Gibson High School where he met the love of his life and best friend Carolyn King. J.C. was an honorable man and well loved by all who knew him. He loved a good joke and had very mischievous nature. J.C. said many times that he felt his greatest accomplishment was to become a father. He said he always knew he wanted to be “a daddy”. He was a strong provider and protector. J.C was a large part of the glue that held his family together. In September of 1965, Jasper proudly joined the Army National Guard and received an honorable discharge in September of 1971. Later, Jasper retired in 1995 after 25 years as a maintenance engineer for Owens Brockway Glass. J.C. was a very hard worker and an accomplished maintenance man whose knowledge was well regarded in his field. He enjoyed working at Brockway Glass and the people that worked there. He looked out for many during his days at Brockway. If someone was out on sick leave for an extended time, he would take up a “pot” as a contribution to the family and, sometimes, chip in more than anyone else if he felt there was a need. Jasper is preceded in death by his beloved parents, J.L. “Chub” Young and Ida Ellen Young; sisters, Annabelle Murray and Margie Seabolt. Those left to cherish his memory are his wife Carolyn of 48 years of the home; daughters, Cathy Young of Fort Gibson, Carrie Young of Fort Gibson and Darla Smith of Muskogee, OK; a son, Patrick Young of Fort Gibson, OK and a total of 10 grandchildren: Glenn, Erin, Alissa, Vivian, Adam, Dylan, Alex, Keely, Ally and Jozzlyn along with 2 great-grandchildren: Tristan and Samuel. All will miss his gentle, sheepish smile and playfulness. Many extended family and friends will also remember him fondly as all who knew him, liked him. A graveside service will be held 1:00PM Friday, September 29, 2017 at the Citizens Cemetery Pavilion with family officiating. In lieu of flowers, the family asks that anyone who wishes to honor his memory do so by simply doing something nice for someone for no reason at all. J.C. was a kind man who had a generous nature with family and strangers alike. He would be pleased that people who knew him extended kindness to others in his honor. Kindness was one of the things he valued the most. The family of Jasper Charlie Young has entrusted his services and burial to Clifford D Garrett Family Funeral Home and Cremation Service, Fort Gibson, OK 918-478-2555 Online condolences may be left at clifforddgarrettfamilyfh.com

The family of Jasper Charlie Young created this Life Tributes page to make it easy to share your memories.

Send flowers to the Young family.