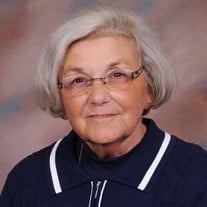 Jere Ann Gibson, 81, of Fort Gibson, was born July 9, 1938 in Muskogee, OK to Harry and Ruby Eva (Wheeler) Juergens and peacefully passed away Wednesday, January 1, 2020 in Fort Gibson, with her loving family by her side. Jere received her formal education in Muskogee where she graduated from Muskogee Central High School Class of 56. On May 8, 1965 she married the love of her life Charles H. Gibson in Durant, OK. She loved children and had watched over 100 children in her home through the years, many who were teachers’ children. She taught many of them how to swim, along with many life lessons. Jere was involved in many things, from the Cub Scouts to the Girl Scouts, participated in Red Cross Blood Drives, she was a speaker for the National Honor Society, and championed many worthwhile causes like Fort Gibson Coats For Kids, Special Olympics, and Meals on Wheels. Jere was a sponsor for Up with People, she was an avid participant at the Old Fort Days, Famous Readers Club, Founder of the FUMC Food Bank, Clothing Programs, and the Community Education for Fort Gibson Schools. Mrs. Gibson proudly served on the Fort Gibson School Board for 34 years, while serving on the Oklahoma State School Board Association, Region 8 Director, from 1987-2015. She was a mentor and leader in the First United Methodist Church women’s group in Fort Gibson and a Sunday school teacher. Jere always made time to help the First United Methodist Church Greenleaf Lake Ministry. She received many school board awards; she was a member of the All State Board in 1996 and was one of the top 5 honored that year. She also won the Tribute to Education in 1997, Buddy Spencer Leadership Award in 1998, and the Oklahoma State School Board Academy Level V in 2006. Her more than three decades of public service and dedication to enriching the lives of children in Fort Gibson earned the respect of her colleagues. She saw many changes of public education, but always kept Fort Gibson on the cutting edge. Jere is lovingly survived by her sons; Michael Gibson and wife Donna of Fort Gibson and Matthew Gibson and wife Stephanie of Tuttle, OK; sister, Janie Human; grandchildren, Kristin, Josh, Michaela, Ashley and husband Ross Barnes, Blair, Kaylee and Cole; great grandchildren, Nathan and Colton Dixon, Maddox and Lukan Gibson; extended family and many friends, including a very special daughter Nicole Points Frazier. She was preceded in death by her husband; Charles H. Gibson Jr.; mom and dad, son, Lewis (Lanny) Gibson; and granddaughter, Kallie Gibson. A visitation will be held Friday, January 3, 2020 at Clifford D Garrett Family Funeral Home with family receiving friends from 5PM-7PM. A Celebration of Jere’s life will be held at noon, Saturday, January 4, 2020 at the First United Methodist Church in Fort Gibson with Reverend Dawn Richards officiating. Committal prayers and inurnment will be at a later date at Fort Gibson National Cemetery. Serving as casket bearers will be Greg Moydell, Seth Tree, Jeff Delmedico, Billy Ray White, Larry Moore and Ross Barnes. Derald Glover, John Moffitt, Chester Hendrix, Robert Kelly, Larry Sands and Larry Dale Cooper will serve as honorary casket bearers. The family of Jere Ann Gibson has entrusted her care, services, and cremation to Clifford D Garrett Family Funeral Home, Fort Gibson, OK. 918-478-2555. Online condolences may be left at clifforddgarrettfamilyfh.com

Jere Ann Gibson, 81, of Fort Gibson, was born July 9, 1938 in Muskogee, OK to Harry and Ruby Eva (Wheeler) Juergens and peacefully passed away Wednesday, January 1, 2020 in Fort Gibson, with her loving family by her side. Jere received her formal... View Obituary & Service Information

The family of Jere A Gibson created this Life Tributes page to make it easy to share your memories.

Send flowers to the Gibson family.