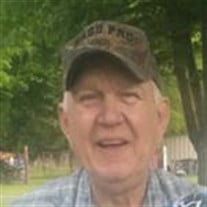 Jerry Leon Clopton, 65, a lifelong resident of Fort Gibson, Ok, passed away Monday, July 3, 2017 in Tulsa, Oklahoma with his loving family by his side. Jerry was born September 19, 1951 in Fort Gibson, OK to Sam and Bertha (Brundage) Clopton.... View Obituary & Service Information

The family of Jerry Leon Clopton created this Life Tributes page to make it easy to share your memories.

Send flowers to the Clopton family.