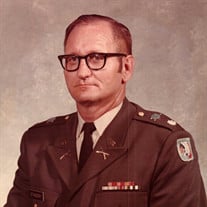 Jim Dale Stanberry was born Feb.19, 1933 in Wewoka, Oklahoma. He passed away on May 25, 2017 in Houston, TX surrounded by “his” girls. Jim graduated from Wewoka High School in 1951, where he lettered in football as well as wrestling and shotput. He continued his education at the University of Tulsa where he met his college sweetheart, Karol Jene Davis. They were married March 3, 1953, and together raised 4 children. He later graduated from Northeastern University in Tahlequah, Oklahoma in 1958 with a Bachelor’s Degree of Science in Education with a major in mathematics and minor in Physics and Chemistry. Compelled to learn more he went back to school and eventually graduated from The University of Oklahoma in August of 1964 with a masters of Natural Sciences and a major in Mathematics. In 1947 Jim began a long and committed military career spanning over 40 years. He used his long background in education to teach at military academies, serve in the National Guard and work at the Pentagon. In his daily civilian life Jim taught Junior High Mathematics as well as High School Chemistry and Physics. In addition to teaching full time he was the coach for the football team. He performed the same duties for the Oklahoma Military Academy Junior College in Claremore, OK. Jim was also an avid MARS member as well as an instructor and licenser for Ham Radio operators. He was in Law Enforcement for the State of Oklahoma and worked many years for the ABLE Commission. He is preceded in death by his parents Leonard and Myrtle, his brother’s Leonard, Lee and Jack, his son Jimmy, daughter-in-law Linda, and grandson Brian Sigman. He is survived by his loving wife Karol, daughters Debbie Griffon and husband David, Diane Stewart and husband James, and Melissa Ball, along with 14 grandchildren, Christen Amanis and husband Nic, James G. Stewart and wife Valerie, Meagan Stewart, Andrew Stewart, Elizabeth Buchanan and husband Mike, Benjamin Griffon, Jennifer Daniels and husband Will, Tommy Lee Ball and wife Tahlia, and Taylor Max Ball. Jim is also survived by his 12 great-grand children: Nick, Brooklyn, and Zander Sigman, Jesse Humphrey, Madison and Dylan Thurman, Beckam Amanis, Ethan Stewart, and Christian, Evan, Delaney and Leah Daniels. Jim was a man of integrity, always honest, friendly, faithful and fair. He loved his wife beyond measure and his family meant the world to him. Jim enjoyed his neighbors, football, and making memories playing Mexican Dominoes. He had a quiet sense of humor and a touch of stubbornness. Jim was deeply loved and respected by all and will be greatly missed. Jim’s viewing will be 9:00 AM to 11:00 AM Thursday at Funeral Home. Funeral services will be held 11:30 AM Thursday, June 1, 2017 in the Clifford D Garrett Family Funeral Home Chapel in Fort Gibson with Chaplain Forrest Kirk officiating. Committal prayers and interment will follow at 1:00 PM in the Fort Gibson National Cemetery with David Griffon, Benjamin Griffon, James Stewart, Andrew Stewart, Tommy Ball, Taylor Ball, Nic Amanis and Nicholas Sigman serving as pallbearers. Honorary pallbearers are James G Stewart, Jesse Humphrey, Dylan Thurman, Mike Buchanon, Christian Daniels and Evan Daniels. Fort Sill's Army Honors Detail will perform full Military Honors. The Family of Jim Dale Stanberry has entrusted his services and burial to Clifford D Garrett Family Funeral Home and Cremation Service Fort Gibson, OK. 918-478-2555

The family of Jim Dale Stanberry created this Life Tributes page to make it easy to share your memories.

Send flowers to the Stanberry family.