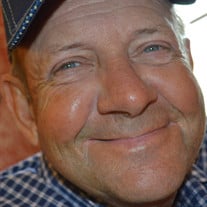 Jimmy Lee Bradley was born in Muskogee, Oklahoma, on January 17, 1942 to Wren Eugene Bradley and Ellen Lena Phillips. He was a longtime resident of Fort Gibson. Jimmy went to be with our Lord on Tuesday, October 15, 2019 at the age of 77. He was a beloved husband, father, grandfather, and great grandfather. He was a mechanic/adjuster at Georgia Pacific for over 35 years. He graduated from Fort Gibson High School in 1960. As a young man his love of horses led him to compete in many rodeos as a steer wrestler and later as a team roper. He was also the president of the Fort Gibson Round Up Club for several years. As he aged, he traded for the “safer” hobby of IMCA Factory Stock Racing. He built many engines and race cars for family and friends. Jimmy could be found most evenings sitting in his shop or carport with his dog Peanut, “thinking”, as he put it. He was always ready to visit with anyone who stopped by. He married his High School sweetheart, Billie Jean Faddis on June 21, 1960. They were blessed with 3 children. Those left to cherish his memory are his wife of 59 years Billie Jean of the home; twin brother, John Bradley and his wife Elwanda of Fort Gibson; his daughters, LeAnn (Paul) Killman of Muskogee, Norma (Alan) Cooper of Fort Gibson, and son, Michael Bradley and fiancé (Michele Marshall) of Fort Gibson; 6 grandchildren; Adrienne (Tim) Berres, Evan (Leigh) Cooper, Carrigan Bradley and Haddison Bradley all of Fort Gibson, OK, Mallory (Cody) Cook of Portage, Indiana, Brittany (Kevin) Cooper of Mannford, OK; 10 great grandchildren, Gabriel and Ben Berres, Remington and Taylor Cooper all of Fort Gibson, OK, Jameson, Ireland and McKinley Cook all of Portage, IN, Paige, Cheyenne and Ty Cooper all of Mannford, OK. Along with numerous nieces, nephews, cousins and longtime friends. He was preceded in death by his parents; four brothers, Euel, Marvin, P.J. and Bill Bradley and sister Pauline Yeager. A visitation will be held from 5PM-7PM Thursday, October 17, 2019 at Clifford D Garrett Family Funeral Home, Fort Gibson, Oklahoma. A service celebrating Jimmy’s life is scheduled for 11AM Friday, October 18, 2019 at Calvary Faith Church in Fort Gibson with Pastor Don Reed and Pastor Fred Huffman officiating. Committal prayers and interment will follow at Citizens Cemetery in Fort Gibson with Evan Cooper, Johnny Ray Bradley, Kevin D. Cooper, Shannon Reheard, Ron Leach, Jon Landers and Darrell Merrill serving as casket bearers. Honorary casket bearers are John Jeffries, Jimmy K. Taylor and Don Underwood. The family of Jimmy Lee Bradley has entrusted his care, service and burial to Clifford D Garrett Family Funeral Home, Fort Gibson. 918-478-2555 Online condolences may be left at clifforddgarrettfamilyfh.com

Jimmy Lee Bradley was born in Muskogee, Oklahoma, on January 17, 1942 to Wren Eugene Bradley and Ellen Lena Phillips. He was a longtime resident of Fort Gibson. Jimmy went to be with our Lord on Tuesday, October 15, 2019 at the age of 77. He... View Obituary & Service Information

The family of Jimmy Lee Bradley created this Life Tributes page to make it easy to share your memories.

Jimmy Lee Bradley was born in Muskogee, Oklahoma, on January...

Send flowers to the Bradley family.