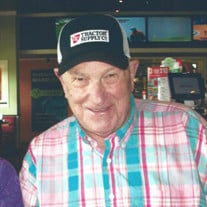 Jimmy Allen O’Dell, 82, of Park Hill, OK was born June 21, 1938 in Fort Gibson, OK to John and Cora (Luna) O’Dell and peacefully passed away January 10, 2021 in Tulsa, OK. Jim grew up in Fort Gibson, where he received his education. He furthered his education at Northeastern State University. He married his best friend, Joyce Ann Willyard on August 30, 1958 in Fort Gibson, OK. Jim worked for the Tahlequah City Hospital in Tahlequah, OK as the Medical Technologist, serving as a Chief Chemist and Hospital Administrator. He was a member of the Masonic Lodge and the Southside Baptist Church. He loved bluegrass music, computers and was well versed in woodworking. Jim loved his family dearly and will be missed by all that knew him. Jim is preceded in death by his parents, a daughter, Monica Leigh O’Dell; and sons, Joseph Anthony O’Dell and Jimmy Allen O’Dell, Jr. Those left to cherish his memory are his wife, Joyce of the home; son, Justin A. O’Dell of Wagoner, OK; daughter, Jessica A. O’Dell of Tahlequah, OK; brothers, Johnny A. O’Dell of Fort Gibson, Danny M. O’Dell of Vian, OK, Donald O’Dell of Broken Arrow, OK, and Stanley O’Dell of Fort Gibson, OK; extended family and many friends. A family conducted memorial service will be held 2PM Saturday, January 16, 2021 at the Citizens Cemetery Pavilion in Fort Gibson, OK. The family of Jimmy Allen O’Dell has entrusted his cremation to Clifford D Garrett Family Funeral Home, Fort Gibson. 918-478-2555. Online condolences may be left for the family at clifforddgarrettfamilyfh.com

The family of Jimmy A. O'Dell created this Life Tributes page to make it easy to share your memories.

Send flowers to the O'Dell family.