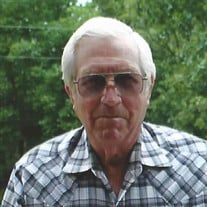 Joe Allen Bowden, 77, a lifelong Fort Gibson resident, was born May 18, 1943 in Boynton, OK to Edward and Eva (Brantley) Bowden and peacefully passed away Tuesday, March 16, 2021 at his home with his loving family by his side. Joe received his education at Wainwright Public Schools. He spent ninety-one days in the 11th grade and then enlisted in the United States Army on March 24, 1961. Joe proudly served his country and was honorably discharged as a Sergeant E-5 on February 28, 1967. On September 16, 1963, Joe married his best friend, Mary Elizabeth Walters, in Fort Gibson, OK. In 1966, together they established their family-owned business, Bowden Pest Control, where they both worked side by side in the business for forty-eight years. It is now presently owned by their grandson, Lance and his wife Lauren Bowden, who have carried on the Bowden legacy since 2014. Joe enjoyed and faithfully attended the car races locally and nationally most of his life. He was a self-taught master mechanic, successfully fixing anything with a motor. Joe never met a stranger and had many stories to tell. He was a lifelong paid in full member of the Frank Gladd American Legion Post #20 in Fort Gibson. He was preceded in death by his parents; wife, Mary Elizabeth Bowden; son, Ronnie Bowden; siblings, Irene Bowden, Melvin Bowden, Lucielle Turney, E.K. Bowden, Bonnie Arnold-Phillips, James Bowden; and great granddaughter, Maven Russell. Joe is lovingly survived by his daughter, Helen Soto of Heavener, OK; grandchildren, Bethany Russell, Lance Bowden, Jennifer Voyles, Santos Soto, III, Cecelia Soto, and Katelyn Jochims; 12 great grandchildren; his sisters, Joyce Steveson and Wanda Cook; brothers, Lawrence Bowden and Bobby Bowden; extended family and many friends. A visitation will be held Sunday, March 21, 2021 at Clifford D Garrett Family Funeral Home in Fort Gibson with the family receiving friends 1PM-3PM. A Celebration of Joe’s life will be held 10AM Monday, March 22, 2021 at the Citizens Cemetery Pavilion in Fort Gibson, OK. The family of Joe Allen Bowden has entrusted his care, services and burial to Clifford D Garrett Family Funeral Home and Cremation Service, Fort Gibson, OK. 918-478-2555. Online condolences may be left for the family at clifforddgarrettfamilyfh.com

Joe Allen Bowden, 77, a lifelong Fort Gibson resident, was born May 18, 1943 in Boynton, OK to Edward and Eva (Brantley) Bowden and peacefully passed away Tuesday, March 16, 2021 at his home with his loving family by his side. Joe received his... View Obituary & Service Information

The family of Joe A. Bowden created this Life Tributes page to make it easy to share your memories.

Send flowers to the Bowden family.