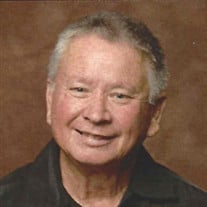 John Arthur Brumfield, 72, of Fort Gibson was born July 5, 1947 in Bethesda, Maryland to Jim and Grace (Morton) Brumfield and peacefully passed away Thursday, May 7, 2020 in Tahlequah, OK. He graduated from Okmulgee High School and Okmulgee Tech. He married the love of his life Joy Schoonover on December 7, 1987 in Eureka Springs, Arkansas. John proudly served in the United States Air Force during the Vietnam War. He enlisted on February 27, 1968 and received an Honorable discharge on January 31, 1972. He retired from Southwestern Bell Telephone in 2002 in Bella Vista, Arkansas. After retirement he spent his day loving and playing golf. He was a member of Oldham Memorial Baptist Church in Muskogee. John was loving, funny and charming all of his life. John was preceded in death by his parents; Jim and Grace Brumfield; and brother, James Brumfield. He is lovingly survived by his wife; Joy, of the home; stepson, David Russell and wife Becky of Okay; son, Shawn Brumfield of Houston, Texas; daughter, Michelle Eartly and her husband Tommie of Okmulgee; brothers, Fred Harrison and wife Margaret of Tulsa, Dan Brumfield and wife Linda of Sacramento, CA; sisters, Ruthe Hartz and husband Rick of Sacramento, CA, Gracie Walraven and husband Jim of Edmond, Gyla Brumfield of Okmulgee; grandchildren, Ariel, Blake, Brice, Autumn, Brandon and Brooke; many nieces, nephews and many friends. A private family service has been planned. The family of John Arthur Brumfield has entrusted his care and burial to Clifford D Garrett Family Funeral Home, Fort Gibson. 918-478-2555. Online condolences may be left at clifforddgarrettfamilyfh.com

John Arthur Brumfield, 72, of Fort Gibson was born July 5, 1947 in Bethesda, Maryland to Jim and Grace (Morton) Brumfield and peacefully passed away Thursday, May 7, 2020 in Tahlequah, OK. He graduated from Okmulgee High School and Okmulgee... View Obituary & Service Information

The family of John A. Brumfield created this Life Tributes page to make it easy to share your memories.

Send flowers to the Brumfield family.