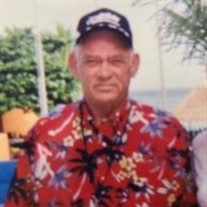 John Taylor ‘Porky’ Gragg, Jr., 78, a lifelong Muskogee resident was born March 1, 1944 in Muskogee to John, Sr. and Margaret (Ragsdale) Gragg and peacefully passed away Tuesday, May 17, 2022. John received his formal education at Muskogee Schools and furthered his education at Northeastern State University, receiving his bachelor’s degree in education. He started his career at Alice Robertson Jr. High and retired from teaching at West Jr. High. John met and later married his best friend, Geneva Bowles and made their home in Muskogee. Porky was an avid fisherman and hunter. He fished many local jackpots and was well known for his knowledge of the area lakes, especially Fort Gibson and Tenkiller. He had a love for nature, and was always ready to go on a hunting trip to Colorado with his son, Jeff and many lifelong friends. Porky was an exceptional card player. He was only known to deal one specific hand, his game, two and twenty-two and had the uncanny ability to draw the right cards. Porky could fix or build anything. From tuning race cars to building shop buildings his knowledge was vast. Porky had a great sense of humor and was extremely quick witted. He was quick to offer a hand to help anyone in need. His legacy of love, devotion, and giving spirit will live on through his family. John will be missed by many. John was preceded in death by his parents, John and Margaret Gragg; brother-in-law, Jimmy Bowles; sister-in-law, Yvonne Bowles; nephews, Mark and Jeremy Bowles. Those left to cherish John’s memories are his wife, Geneva of the home; son, Jeff Gragg and wife Marty; daughter, Jennifer Davis; brother, Mike Gragg; his grandchildren, Jeff Gragg, Jr., Taylor and Laynie Gragg; Meghan Combs and husband Shelby, and Alec Davis; great grandkids, Adeleyna and Grayson. John’s memorial service will be held 2PM, Thursday, May 26, 2022 at Greenhill Cemetery Pavilion in Muskogee, OK. The family of John Taylor Gragg, Jr., has entrusted his care, cremation, and service to Clifford D Garrett Family Funeral Home, Fort Gibson. 918-478-2555. Online condolences may be left for the family at clifforddgarrettfamilyfh.com

The family of John Taylor 'Porky' Gragg, Jr. created this Life Tributes page to make it easy to share your memories.

Send flowers to the Gragg, family.