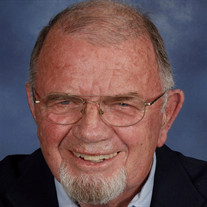 John Edward Luce was born in October 8, 1934, in Glendale, California. He was the fifth of six children in the blended family of his parents, John William Luce and Alice Maxine (Mullin) Luce. His siblings included brother, Lee Lundwall, sister,... View Obituary & Service Information

The family of John Edward Luce created this Life Tributes page to make it easy to share your memories.

Send flowers to the Luce family.