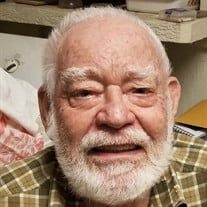 John Ronald Preston, Sr. was born November 20th 1932. His love of adventure never faltered in 89 years and it was a private joke between his grandchildren that he had been outsmarting and scaring off death for the last decade. Unfortunately, on November 27th, after a life full of adventure and misadventure, John peacefully passed away due to congestive heart failure. His son, Ron, was at his bedside as John took his last steps from this life into the next. John had many friends and family waiting for him in death, but there was truly no one he was looking forward to seeing more than Sara, the love of his life and eternal companion. John and Sara met in high school. The family legend goes that John was walking with a friend down a country road past Sara’s family farm. John saw Sara from afar and turned to his friend and said “that’s the girl I’m going to marry.” No one can remember the name of the friend now, but the important thing is that John’s prediction came true. John and Sara were married November 26, 1952 as John was studying at Oklahoma State University. John’s love for nature and wildlife must have been part of his DNA because he was educating himself by exploring the outdoors long before any formal education began. John earned his Bachelor's degree in Biology from Oklahoma State University, and a Master’s degree in zoology from the University of Arkansas. He was passionate about educating students across the country about the great outdoors. John loved to share his enthusiasm for nature and adventure with people of all ages. He worked with schools, museums, zoos, and camps to educate children and adults about animals and the environment they live in. Wherever John worked he immediately created and implemented educational and outreach programs that really were his true love. He was a prolific writer beginning in Ft. Worth, TX to Weston, CT to Fayetteville and Little Rock, AR and finally in Oklahoma City John continuously was writing outdoor education material including nature programs and displays. John was also an avid photographer. Until his eyesight prohibited it, he constantly carried a camera with him. His family has been richly blessed by his photographic family history! He also curated a very impressive collection of wildlife and wild flower photographs that have been featured in several nature centers in Arkansas, Oklahoma and Texas. John was preceded in death by his parents, Ray Sherrill Preston and Lorena Blanton Preston, his daughter Teresa R. Owens, his great granddaughter, Clara Renae Gardner, and his wife Sara Huggins Preston. He leaves behind three children, John R. (Ron) Preston, Jr., Lolly (Ben) Lyman and Aaron R. Preston. His grandchildren are: Matthew and Daniel Owens, Katye (Mark) Gardner, Missy Preston, Hansen Lyman, Tressa (Jarren) Rochester, Preston (Naomi) Lyman, Shayla (Jackie) Morales, Eliza (Jacob) King, and Robison Lyman. John’s great grandchildren are: Clara Garnder (deceased), Fox Gardner, Adelia Rochester, Lyla Rochester, Ben Rochester, Jubilee Lyman and Miriam Rochester, who was born on John’s 89th birthday. John also left behind countless friends and colleagues. He was a man who touched and changed many lives and we are all counting the days till we see him again. It is only a matter of time. This obituary was beautifully written by the family of John Ronald Preston, Sr. Visitation for John will be 10AM-11:30AM, Friday, December 10, 2021 at Clifford D Garrett Family Funeral Home in Fort Gibson. A service Celebrating John’s life will be 1PM, Friday, December 10, 2021 at the Citizens Cemetery Pavilion, Fort Gibson. The family of John Ronald Preston, Sr., has entrusted his care, service and burial to Clifford D Garrett Family Funeral Home, Fort Gibson, OK. 918-478-2555. Online condolences may be left for the family at clifforddgarrettfamilyfh.com

John Ronald Preston, Sr. was born November 20th 1932. His love of adventure never faltered in 89 years and it was a private joke between his grandchildren that he had been outsmarting and scaring off death for the last decade. Unfortunately,... View Obituary & Service Information

The family of John Ronald Preston Sr. created this Life Tributes page to make it easy to share your memories.

Send flowers to the Preston family.