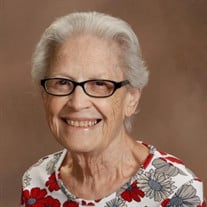 Joyce Marie Lawson Dillingham, lovingly known as "Mogger," passed away peacefully to the arms of her Lord on January 16, 2021, at the Fort Gibson Nursing Home with her daughters at her side. In Vivian, OK, she was born March 13, 1934, to Charlie... View Obituary & Service Information

The family of Joyce Marie Dillingham created this Life Tributes page to make it easy to share your memories.

Send flowers to the Dillingham family.