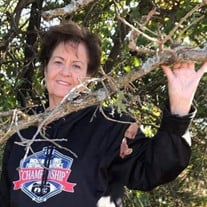 Judith Leora Marshall, 79, of Broken Arrow, Oklahoma greeted Jesus at Heaven’s gates on April 1, 2022, peacefully in her home. Judy was born December 20, 1942, to Ray and Estella Beatrice (Smith) Blankenship. She graduated from High School in Tulsa, OK. Judy was blessed with two children from her first marriage: daughter, Rhonda Lewis & son, Donald Ray Leeds. On August 24, 1968, she married Johnnie Marshall, Jr. and was blessed a third time with another daughter, Katrina Holt. Judy and Johnnie celebrated almost 50 years of life and marriage together before his passing in 2015. Judy’s passions in life were crafting, making flower arrangements, remodeling her house, traveling and watching her grandchildren play sports. Judy retired from Wright College as the college bursar where she herself attended and graduated receiving a degree. Judy accepted Jesus Christ as her personal Savior and followed that decision in baptism in the 3rd grade at a Baptist church in Vinita, Oklahoma. She walked to church in order to attend. She continued her love for the Lord and served as a member of Century Cathedral Church in Tulsa, Oklahoma where she decorated the church with her beautiful flower arrangements. Judy was preceded in death by her parents, Ray and Estella Beatrice Blankenship, her infant son, James Donald Leeds, Jr., her husband, Johnnie Marshall, and brothers, Sherby and Ronald Blankenship. Judy is survived by her three children, Rhonda Lewis and husband Doug of Broken Arrow; Donald Ray Leeds and wife Kim of Boise, Idaho; Katrina Holt and husband Norman of Broken Arrow; her sister, Gayle Miller and husband Jim of Kansas City, Missouri; her eight grandchildren and two great-grandchildren; along with other family and friends who will miss her dearly. In lieu of flowers, the family has requested a memorial contribution in Judy’s name be made to the American Cancer Society at www.cancer.org. A service celebrating Judy’s life will be held 1:00PM Tuesday, April 5, 2022, at Clifford D Garrett Family Funeral Home Chapel with Rev. Lonnie Orman officiating and Zach Lewis, Talon Holt, Cody Lusby, Cameron Orman, Cale Orman and Kenny Goodwin serving as Casket Bearers. Committal prayers and interment will follow at 2:30PM at Fort Gibson National Cemetery. The family of Judith Leora Marshall has entrusted her care, service and burial to Clifford D Garrett Family Funeral Home, Fort Gibson. 918-478-2555. Online condolences may be left at clifforddgarrettfamilyfh.com

The family of Judith Leora Marshall created this Life Tributes page to make it easy to share your memories.

Send flowers to the Marshall family.