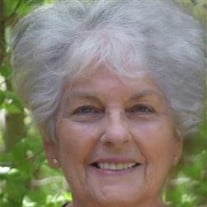 Judy Faye (Gower) Higley, 80, of Fort Gibson, was born July 12, 1939 in Tulsa, OK to Levi and Faye (Hill) Gower and peacefully passed away Wednesday, January 22, 2020 in Tulsa, OK. Judy received her formal education in Tulsa, graduating from Central High School in 1957. She later met and married Arthur Higley in Tulsa, OK where they made their home. They were married for 57 years and had 2 children, Michael and Jamie. The family made Fort Gibson their home in 1975. She worked as an Administrative Assistant most of her life. She retired from the Muskogee County DHS in 2006. Judy was preceded in death by her husband, Art on August 1, 2019; her parents, Levi P. and Faye (Hill) Gower; a brother, Tommy Gower, and a sister, Betty Scisson. Judy is survived by her son; Michael and his wife Michelle; daughter, Jamie and her husband Randy; grandchildren, Mycah Higley and her husband Wiley Abbott, Madison Higley, Kaylee Clyma, Bailey Torix, Jason Clyma and his wife Lindsay; great grandchildren, Addison and Avery Clyma; brothers, Ted Gower and Bob Gower and his wife Sharon; sister in law, Fran Higley, many nieces, nephews and many other beloved family members and friends. A celebration of Judy’s life will be held 11AM Friday, January 31, 2020 at Fort Gibson Church of Christ. The family of Judy Faye Higley has entrusted her cremation to Clifford D Garrett Family Funeral Home, Fort Gibson. 918-478-2555. Online condolences may be left at clifforddgarrettfamilyfh.com

The family of Judy Faye Higley created this Life Tributes page to make it easy to share your memories.

Send flowers to the Higley family.