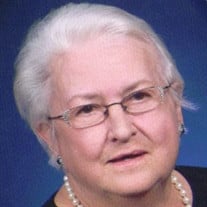 Lowell and Hilda Thomas welcomed their first child, Judy, on August 15, 1944. Judy grew up in Cheyenne, WY. In 1960, she met and married Jerry Metz. Soon after, their first child, Michelle, was born. This was followed by daughters Marisa and Jeri. The family moved from Cheyenne to California in the late 60s. In the 1960s and early 1970s, Judy worked at a country music radio station in California. Her stories of that time were legendary. She met such country stars as Dolly Parton, Porter Wagoner, Johnny Cash (twice) and Glen Campbell. In 1971, the family moved to Fort Gibson, OK, where Judy would spend the rest of her life. She loved the town and its people. Through her daughters, she got involved in 4-H, Cheerleading and Band. Judy also loved her vegetable garden. Her family reaped the rewards of her effort every year, as Judy also loved canning her vegetables. In 1981, she divorced Jerry Metz, but the two remained friends until his death in 2001. In 1982, her first grandchild, Rory Eaton, was born. She went on to be survived by her grandchildren: Rory Eaton and Chelsie, Matthew Oliver, Megan Oliver, Juliet Harris and Olivia Harris; great-grandchildren Kylie, Collin and Danielle. They became the loves of her life and they were devoted to their grandmother until her death on Thursday, August 17, 2017. Judy is also survived by her three children, Michelle Metz and Marisa Metz Harris of Fort Gibson, and Jeri Metz and wife Monica Obando of New York City, NY; by her brothers, Jim Thomas and wife Marolyn, and Tom Thomas of Wyoming, and her sister Vickie Obermueller and her husband Jerry, also of Wyoming; sons-in-law Kenneth Eaton, Glen Oliver, and Charles Harris; and her beloved dogs Mimzy and Peanut. A family conducted memorial service will be held 10:00AM Friday, August 25, 2017 at the First United Methodist Church of Fort Gibson at 302 Beauregard, Fort Gibson, OK 74434. The family of Judy Metz has entrusted her cremation to Clifford D Garrett Family Funeral Home and Cremation Service, Fort Gibson 918-478-2555 Online condolences may be left at clifforddgarrettfamilyfh.com

Lowell and Hilda Thomas welcomed their first child, Judy, on August 15, 1944. Judy grew up in Cheyenne, WY. In 1960, she met and married Jerry Metz. Soon after, their first child, Michelle, was born. This was followed by daughters Marisa and... View Obituary & Service Information

The family of Judy Metz created this Life Tributes page to make it easy to share your memories.

Lowell and Hilda Thomas welcomed their first child, Judy, on...

Send flowers to the Metz family.