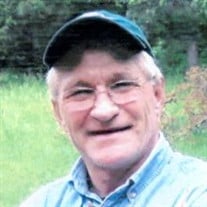 Kenneth Roger Ballew was born on December 26,1949 in Wichita, Kansas. He grew up in Broken Arrow, OK and graduated from high school in 1968 where he played football and was a state champion wrestler. He was drafted and joined the Marines during the Vietnam War where he was wounded in 1971 and received the Purple Heart. Ken went on to graduate from Northeastern State University in 1977. He was the owner and operator of an oil drilling rig until his retirement. Ken had a carefree joyful spirit and a sharp sense of humor that kept those around him laughing and entertained. He enjoyed pheasant hunting with his father and friends in Kansas and fishing in the lakes and rivers of northeast Oklahoma. Ken passed away peacefully on Friday, February 9, 2018 in Muskogee, OK surrounded by his family after a short illness. The family would like to thank Good Neighbor Hospice for helping allow his children the honor of caring for him at home where they could enjoy every last minute with him. A special thank you to Vickie Holland and Staff of the Jack C. Montgomery VA Hospital. Ken is preceded in death by his mother, Maxine Ballew and granddaughter, Danielle Ballew. He is survived by his father, Dr. Dewey Ballew D.D.S of Broken Arrow, OK; daughters, Heather Elgin and husband Brian of Fort Gibson, OK and Kendra Ballew of Tahlequah, OK; sons, Brian Ballew and wife Kimberly of Royse City, TX and Thomas Ballew of Paris, AR; grandchildren, Keith Ballew, Caleb Ballew and Maisie Elgin; great grandchildren, Abigail, Alexis and Tidus Luke; brother, Brent Ballew and wife Lin of Tahlequah, OK, sisters, Brenda Griffin and husband Greg of Broken Arrow, OK and Linda Newkirk and husband Shawn of Broken Arrow, OK; his dog and constant companion Ziggy; many nieces, nephews and many friends. Memorial services celebrating Ken’s life will be held 10:30AM Monday, February 19, 2018 at Clifford D Garrett Family Funeral Home Chapel in Fort Gibson with Pastor Roy Ramsey officiating. Committal prayers and inurnment will follow in the Fort Gibson National Cemetery with Full Military Honors. The family of Kenneth Roger Ballew has entrusted his cremation and services to Clifford D Garrett Family Funeral Home, Fort Gibson. 918-478-2555. Online condolences may be left at clifforddgarrettfamilyfh.com

Kenneth Roger Ballew was born on December 26,1949 in Wichita, Kansas. He grew up in Broken Arrow, OK and graduated from high school in 1968 where he played football and was a state champion wrestler. He was drafted and joined the Marines during... View Obituary & Service Information

The family of Kenneth Roger Ballew created this Life Tributes page to make it easy to share your memories.

Send flowers to the Ballew family.