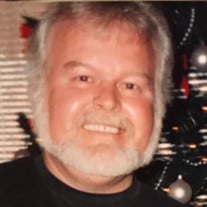 Kenneth Marvin Smith was born July 27, 1943. He was born across the road from the place he would later live until his passing on Wednesday, August 2, 2017. Kenneth was one of eleven children born to Willie T. and Gussie Maude (Church) Smith. He was always getting into trouble but he was his Momma’s “Tumblebug”. In the words of his sisters he was spoiled rotten. Kenneth always stuck up for his brothers and sisters and wouldn’t let anyone pick on them. He was a good brother. Kenneth joined the United States Navy on September 20, 1961 and was stationed at Fallon Nevada, where he communicated with aircraft for their bombing runs. After his Honorable Discharge he came home and worked several odd jobs until he was hired by Fansteel Metals as a Maintenance Mechanic. He was employed by them for 23 years. Kenneth married the love of his life, Jacqueline Cooper on March 27, 1965 in Stilwell, OK. They had three children, William Jackson who passed at birth, Kenneth Shawn and Kimberly Rena. Kenneth loved life. He was always making someone laugh. He loved spending time with family camping and boating on Tenkiller Lake. He loved Sunday dinners at Granny Cooper’s house, but really, who didn’t!? Jackie recalls Kenneth really enjoying hunting and fishing with her father. Kenneth enjoyed motorcycle riding, tinkering on cars and was an exceptional welder. He loved to visit family and friends, often unannounced where he might spend a few minutes or he spend all day. Kenneth enjoyed getting in the car with Jackie and taking off with no destination planned. Shawn recalls fond memories of his dad teaching him how to ride motorcycles, weld and water skiing. While Kim recalls him waking her up on Saturday morning to “sneak” out to breakfast while everyone else slept. She also shared many visits with him when Trent was small. Mike recalls Kenneth telling him when he started dating Kim that he really wasn’t fond of him until he proved to Kenneth he could in fact work on cars and said “he wasn’t so bad after all”. They enjoyed many years hunting, fishing and tinkering on cars together. Trina remembers him giving her a “hard time” about not liking squirrels and not wanting to eat “rodent”, so Kenneth being the prankster he was tricked her into eating her fair share of “chicken” aka squirrel for Sunday dinner. Needless to say she now loves squirrel. Trent remembers riding motorcycles with his Pawpaw. Being pulled around the yard in his wagon behind the lawnmower, working with his Pawpaw at the filling station. He recalls his Pawpaw complaining how he made more tips than anyone else all because he was “so cute”! They also hunted, fished and just spent time together. Gavin remembers going to the barbershop on Saturday mornings and having to sit and listen to the “old” men complain! Going to breakfast with him and having biscuit and gravy, hunting and fishing and spending time with Pawpaw. Aubrae remembers Pawpaw’s orneriness and constant pestering each other. Later she would become his “favorite girlfriend”! Kenneth is survived by his wife of 52 years, Jackie of the home; children, Shawn Smith and wife Trina, Kim Sharp and husband Mike; grandchildren Trent and Aubrae Sharp and Gavin Smith; many nieces, nephews, cousins in many friends. The family would like to invite everyone to a celebration of Kenneth’s life on Saturday, August 5, 2017 in the Fort Gibson Community Center from 1PM-5PM. The family of Kenneth Marvin Smith has entrusted his cremation and services to Clifford D Garrett Family Funeral Home and Cremation Service Fort Gibson, OK 918-478-2555 Online condolences may be left at clifforddgarrettfamilyfh.com

Kenneth Marvin Smith was born July 27, 1943. He was born across the road from the place he would later live until his passing on Wednesday, August 2, 2017. Kenneth was one of eleven children born to Willie T. and Gussie Maude (Church) Smith.... View Obituary & Service Information

The family of Kenneth Marvin Smith created this Life Tributes page to make it easy to share your memories.