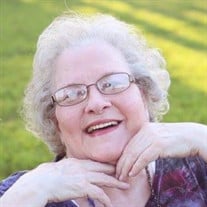 Laurel Ann Huggins Andrews was born at home, on what was then known as the Worterfield Farm in the Perkins area of Fort Gibson, Oklahoma, on December 2, 1936, to James Wallace and Ludy Angeline Thornton Huggins. She passed from this life at the age of 83 on March 30, 2020, in Fort Gibson at the home of her daughter. Ann and her twin sister Carol were born the youngest of 12 children, and they spent their childhood days playing on the farm with their younger siblings and being spoiled by their older ones. As a child, Ann attended the one-room Brown Schoolhouse before eventually graduating from Fort Gibson High School in 1955. As a young woman, Ann poured her heart and energy into her children, creating a fun and secure home for them. She was a talented cook, who could turn the humblest of ingredients into the finest of meals. Visiting relatives always counted on the fact that Ann would have a pie or cake baked for them, and she probably baked at least a million chocolate chip cookies during her lifetime. Ann saw the beauty of living an uncomplicated life and blessed the lives of her children by teaching them the simple joys of making clover chains in the yard or throwing down a quilt in the field to experience the adventure of a cow-pasture picnic. Once her children began leaving home, Ann worked as a para professional with the Fort Gibson School district. Following this, she began a 25-year career in child care, first caring for children in her own home, and then later at the Muskogee Regional Medical Center Employee Daycare, where she became known as “the baby whisperer.” Ann possessed a special knack for soothing babies and loved each one she cared for as if he or she were her own. In return, she was equally loved and valued by them and by their appreciative parents. Ann possessed a humble and compassionate heart, and she was quick to put herself and her needs second. She possessed a warm smile that revealed her kind, loving, and accepting nature, and she was naturally gifted in putting people at ease. In fact, it was not uncommon for perfect strangers to strike up meaningful conversations with her in a doctor’s office waiting room or while standing in line to check out at a grocery store, and she never failed to take a genuine interest in both them and in their stories. Ann was a dedicated Christian, who faithfully served God as a member of the Fort Gibson Church of Christ all of her life, leaving a deep heritage of faith for her children and grandchildren. She believed no earthly title could surpass those of “Mom” and “Mamaw,” and she was happiest when she was surrounded by her family. Ann is survived by her children, Tammy Shrum and husband Dwayne of Oklahoma City, Beth Brannon and husband Doug of Fort Gibson, Max Andrews and wife Shelli of Cincinnati, Ohio, Becky Berkenbile and husband Mike of Fort Gibson; grandchildren, Ashley Rouse and husband Eric, Andy Brannon and wife Kenna, Kyle Shrum and wife Myka, Melissa Peters, Josh Andrews and wife Alisha, Brooke Berkenbile, Cole Berkenbile and Joseph Andrews; great-grandchildren, Maddux, Jaxon, Fischer, Gray, North, Madyson, Emma and Harper; brother, Warren Dean Huggins; twin sister, Carol Tomlinson; several nieces and nephews; and a host of friends. Ann was preceded in death by her parents; a son, Stanley Mark Andrews; a grandson, Grant Shrum; brothers, Clarence Huggins, Laurence Huggins, George (Deanie) Huggins, Jack Huggins, Abraham (Bud) Huggins, Hugh Owen Huggins and Elmer Huggins; and sisters, Sara Preston and Alma Huggins. In lieu of flowers, the family requests donations be made to the Burnt Cabin Christian Camp Scholarship Fund at the Fort Gibson Church of Christ. A family only service will be held noon, April 1, 2020 on the porch of her daughter’s home in Fort Gibson, Oklahoma with Minister Dan Rouse officiating. Committal prayers and interment will follow at Citizens Cemetery with Andy Brannon, Kyle Shrum, Cole Berkenbile, Joseph Andrews, Eric Rouse and Josh Andrews serving as casket bearers. The family of Laurel Ann Andrews has entrusted her care, service and burial to Clifford D Garrett Family Funeral Home, Fort Gibson, OK. 918-478-2555 Online condolences may be left at clifforddgarrettfamilyfh.com

Laurel Ann Huggins Andrews was born at home, on what was then known as the Worterfield Farm in the Perkins area of Fort Gibson, Oklahoma, on December 2, 1936, to James Wallace and Ludy Angeline Thornton Huggins. She passed from this life at... View Obituary & Service Information

The family of Laurel Ann Huggins Andrews created this Life Tributes page to make it easy to share your memories.

Laurel Ann Huggins Andrews was born at home, on what was then...