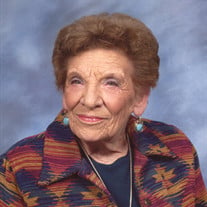 Leowanna “Boot” Wasson, 87, left her temporary home to her eternal home on Sunday, April 23, 2017. She was born August 19, 1929 in Drumright, Oklahoma, the only child of Norvell and Elma (Hinds) Henley. Leowanna grew up in the Stillwell area, graduating from Stillwell High School. She went on to attend Northeastern State College, where she met the love of her life Leonard Wasson. She always said it was a match made in Heaven because when she met him, something told her she’d marry that man and she did on May 28, 1949. They had three children; Ben, Anne and Jody. After the children went through the Bartlesville, Oklahoma school system, they moved to Fort Gibson, Oklahoma in 1971. Leowanna was proceeded in death by her parents; her husband Leonard; son, Ben; daughter, Jody. She is survived by her beloved daughter; Anne of the home; grandsons, Brian Beasley and wife Alicia of Braggs, Oklahoma, Joshua Cunningham and wife Rachael of Cleveland, Oklahoma, Jed Wasson and wife Amy of Clovis, New Mexico; stepson, Braden; granddaughter, Heather Sexton and husband Justin of Amarillo, Texas; great grandchildren, Riley and Rake Beasley, Sara and Taylor Sexton, Law and Lex Cunningham. Next to her family and church, her greatest love was trail riding. Leowanna was a long-time member of the Fort Gibson United Methodist Church where the Celebration of Her Life will be held on Friday, April 28, 2017 at 1:00PM In lieu of flowers the family request donations be made in her name to the church memorial fund. Fort Gibson United Methodist Church Memorial Fund, PO Box 370/302 Beauregard, Fort Gibson, Oklahoma 74434. The family of Leowanna “Boot” Wasson has entrusted her care, services and burial to Clifford D Garrett Family Funeral Home and Cremation Service, Fort Gibson, Oklahoma 1224 E Poplar/PO Box 1973 Fort Gibson, Oklahoma (918) 478-2555. Online condolences may be left at clifforddgarrettfamilyfh.com

The family of Leowanna "Boot" Wasson created this Life Tributes page to make it easy to share your memories.

Leowanna “Boot” Wasson, 87, left her temporary home to her eternal...

Send flowers to the Wasson family.