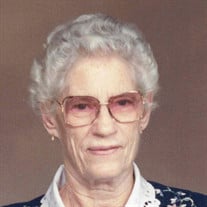 Littie Lavelle Hughart, 88, of Webbers Falls, OK was born November 28, 1929 in Webbers Falls, OK to Junus and Effie (Martin) Wooten and passed away peacefully with her children by her side on Monday, January 29, 2018 in Eufaula, OK. She was raised in Webbers Falls and moved to Muskogee after marrying Clifford Hughart on November 27, 1954. Lavelle was a homemaker and caregiver. She won numerous awards for her quilting ability. Not one to set still very long, she was always tending to her beautiful vegetable garden and canning the fruits of her labor. She was the best cook and made it mandatory to eat anytime you visited. Her legacy of love and devotion will live on for generations. Lavelle was preceded in death by her husband, Clifford; her parents; sisters, Pawnee Bennett and Kathleen Wooten. Those left to cherish her memory are her sons, Connie Amerson and wife Susan of Fort Gibson, Gary Hughart and wife Sue of Checotah; daughter, Linda White and husband Gilbert of Checotah; nine grandchildren and 16 great-grandchildren; brother, Carroll Wooten and wife Evelyn of Webbers Falls. The family would like to give a special Thank You to Cathey Smith and all those who attended to her care at Eufaula Manor, who lovingly helped take care of our mom. Viewing will be Thursday, February 1, 2018 from 9:00AM to 7:00PM at Clifford D Garrett Family Funeral Home Fort Gibson. Services for Lavelle will be 10:00 AM Friday, February 2, 2018 at the First Baptist Church in Webbers Falls, OK with Reverend Cletus Jones officiating. Committal prayers and interment will follow in the Snake Girty Cemetery with Chris White, Matt Hughart, Toney Wooten, Tyler Wooten, Kyle Wooten and Zachary Wooten serving as casket bearers. Honorary casket bearers are Brent White, Gil White, Hayden Russell, Mason McCoy, Mike Wooten, Arthur Wooten, JC Wooten, John Hughart and Kelly Hughart. The family of Littie Lavelle Hughart has entrusted her care, services and burial to Clifford D Garrett Family Funeral Home, Fort Gibson. 918-478-2555. Online condolences may be left at clifforddgarrettfamilyfh.com

Littie Lavelle Hughart, 88, of Webbers Falls, OK was born November 28, 1929 in Webbers Falls, OK to Junus and Effie (Martin) Wooten and passed away peacefully with her children by her side on Monday, January 29, 2018 in Eufaula, OK. She was... View Obituary & Service Information

The family of Littie Lavelle Hughart created this Life Tributes page to make it easy to share your memories.

Send flowers to the Hughart family.