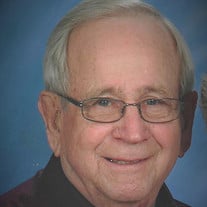 Lonnie ‘Harold’ O’Dell, 87, of Muskogee was born March 28, 1932 in Fort Gibson, OK to Lonnie and Opal (Woods) O’Dell and went home to be with the Lord on Sunday, September 15, 2019 at the Jack C Montgomery Veteran’s Hospital in Muskogee with his loving family by his side. Harold grew up and received his formal education in Fort Gibson. He joined the United States Air Force on March 1, 1951 serving during the Korean Conflict and received an honorable discharge on March 1, 1955 at the rank of Airman First Class. He furthered his education at Northeastern State University and Oklahoma State University. He received his Master’s in education administration at NSU. His teaching career began at Braggs, followed by teaching carpentry at Fort Gibson and the Indian Capital Area Vo-Tech as a carpentry instructor and later as an administrator, retiring after 32 years service in 1988. Harold was a faithful member of the Fort Gibson First United Methodist Church where he was involved in mission service using his building skills. He served as a Fort Gibson City Councilor, was a member of the Muskogee County Retired Educators, and sat on the Kate Frank Board of Directors in Muskogee. He was a hobby beekeeper for many years and loved to share his knowledge with others. Harold loved his family and friends dearly and toward the end of his life they became more precious to him. He might not always recognize his former carpentry students but he never forgot them. Harold is preceded in death by his parents; brothers, Billy O’Dell and Floyd O’Dell; sister, Louise Venus; and grandson, Morgan Lane Ragsdale. Those left to cherish his memory are his wife Ruth of the home; daughters, Melanie Ragsdale and husband Bruce of Fort Gibson, OK and Melinda Beth Cox and husband Don of Tulsa, OK; brother, Cloyd O’Dell and wife Betty, special cousin Sherlene Baker and husband Mike; grandchildren, Lauren Shryock, Jordan Newberry and Seth Ragsdale; great grandchildren, Annabelle Shryock and Evangeline Shryock; extended family, church family and many friends. In lieu of flowers the family request donations in Harold’s name to the Fort Gibson First United Methodist Church, P.O. Box 370 Fort Gibson, OK 74434. A visitation will be held Wednesday, September 18, 2019 at the Clifford D Garrett Family Funeral Home in Fort Gibson with the family receiving friends 5PM-7PM. A service celebrating Harold’s life will be at noon Thursday, September 19, 2019 at the Fort Gibson First United Methodist Church with Reverend Dawn Richards officiating. Committal prayers and interment will follow at 2PM in the Fort Gibson National Cemetery with Jordan Newberry, Seth Ragsdale, Bruce Ragsdale, Don Cox, Mike Baker and Chester Hendrix serving as casket bearers. Honorary casket bearers are Brad Clinkenbeard, Ken Lee, Brad Holland and Bill Hill. The family of Lonnie Harold O’Dell has entrusted his care, services and burial to Clifford D Garrett Family Funeral Home, Fort Gibson. 918-478-2555 Online condolences may be left at clifforddgarrettfamilyfh.com

The family of Lonnie Harold O'Dell created this Life Tributes page to make it easy to share your memories.

Send flowers to the O'Dell family.