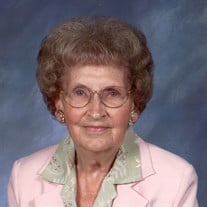 Lora Annis (Perry) Jones, 96 of Fort Gibson was born October 29, 1921 in Braggs, OK to Elmer and Minnie (Harris) Perry and entered Heaven’s Gates on Tuesday, October 31, 2017 in Tahlequah. Annis grew up in Braggs and Fort Gibson where she attended school. Annis married her best friend Jimmy Jones on November 12, 1940. A marriage of 53 years until his passing on March 17, 1994. Annis was a homemaker extraordinaire. Cooking with fresh produce from her garden along with baking and sewing was her passions. She was a member of the Braggs Church of Christ for many years. She was also well versed as a conversationalist. Always willing to discuss the past or the days current events. Her family was her pride and joy and the time spent with them was her life. Annis is preceded in death by her husband Jimmie; parents; stepfather, Pete Hixson; brothers, Ethmer Perry, Gail Perry, Willard Perry, Budo Perry and sister Kathleen Hardy. She is lovingly survived by sons, Eddie Jones and wife Nancy and Jimmie Jones; grandchildren, Kelly Jones and wife Paulette, Randy Jones and wife Jennifer, Andy Jones and wife Sarah, and Adam Jones; five great grandchildren; many extended family and a host of friends. Viewing for Annis will be held Friday, November 3, 2017, 10:00AM-12:30PM at the funeral home. A service celebrating Annis’ life will be 1:00PM Friday, November 3, 2017 in the Clifford D Garrett Family Funeral Home Chapel in Fort Gibson with Minister Leon Brashears officiating. Committal prayers and interment will follow in the Greenhill Cemetery in Muskogee with Kelly Jones, Randy Jones, Nick Jones, Nathan Jones, Joseph Sweet and Mike Moore serving as casket bearers. The family would like to thank Encompass Home Health for their years of service. The family of Lora Annis Jones has entrusted her care, services and burial to Clifford D Garrett Family Funeral Home and Cremation Service Fort Gibson. 918-478-2555. Online condolences may be left at clifforddgarrettfamilyfh.com

The family of Lora Annis (Perry) Jones created this Life Tributes page to make it easy to share your memories.