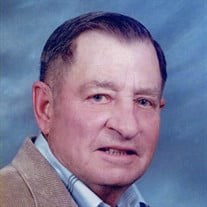 Loyd T. Young, 86, of Fort Gibson was born June 28, 1931 in Centralia, OK to Ed and Grace (Reheard) Young and peacefully passed away Monday, April 16, 2018 at his home. Loyd grew up in Centralia where he attended school. He continued his education at Northeastern State University in Tahlequah, OK, receiving a bachelor’s degree in Math and Chemistry. He joined the United States Army in 1952 serving in Korea where he received two Bronze Stars along with numerous other commendations. He was honorably discharged in 1954 as a Sergeant First Class. He married the love of his life Laura Garrison on November 28, 1968 in Stilwell, OK. Loyd worked as a Chemist at Fansteel Corporation in Muskogee for many years until his retirement in 1990. In his leisure time, Loyd raised race horses and enjoyed spending time with family. He was a proud member of South Ridge Baptist Church in Fort Gibson. Loyd was preceded in death by his wife Laura on February 14, 2018; his parents; brother and sister in law, Bill and Wilma Young and nephew, Billy Young. Those left to cherish his memories are his daughter Dena Howe and son in law, David of Fort Gibson; grandson, Lane Howe; granddaughter, Laura Kate Howe both of Fort Gibson; brothers, Ed Young and wife Jackie of Bartlesville and Bob Young and wife Peggy of Bartlesville; sister, Kathy Elder of Vinita; many nieces, nephews, cousins and many friends. A service celebrating Loyd’s life will be held 12:30PM, Thursday, April 19, 2018 in the South Ridge Baptist Church in Fort Gibson with Pastor Chris Dover officiating. Viewing will be 11AM-12PM Thursday at the Church before his service. Committal prayers and interment will follow in the Citizens Cemetery in Fort Gibson with Dave Howe, Lane Howe, Bob Young, David Sevier, Tommy O’Laughlin & Kelly Gilliam serving as casket bearers. In lieu of flowers the family request donations in Loyd’s name to South Ridge Baptist Church Youth Fund PO Box 247 Fort Gibson, OK 74434. The family of Loyd T. Young has entrusted his services and burial to Clifford D Garrett Family Funeral Home, Fort Gibson. 918-478-2555 Online condolences may be left at clifforddgarrettfamilyfh.com

Loyd T. Young, 86, of Fort Gibson was born June 28, 1931 in Centralia, OK to Ed and Grace (Reheard) Young and peacefully passed away Monday, April 16, 2018 at his home. Loyd grew up in Centralia where he attended school. He continued his education... View Obituary & Service Information

The family of Loyd T Young created this Life Tributes page to make it easy to share your memories.

Send flowers to the Young family.