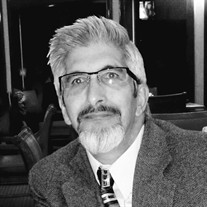 Manuel Joseph Lima Jr. took his final journey and moved to heaven on Tuesday, June 5th, 2018 at the Clarehouse in Tulsa, Oklahoma. Manuel was born on Wednesday, October 12, 1960 in Pawtucket, Rhode Island. He was the only child to his mother, Phyllis Lorraine Lima (deceased) and was his father’s, Manuel Joseph Lima Sr. (deceased) youngest child. Manuel had one brother, Ronald Lima (deceased) and two sisters, Donna Dumont and Paula Boyden. Manuel grew up in Attleboro, Massachusetts until 1978 which was when he enlisted into the military to serve our country. Sergeant First Class, Manuel was part of the First Ranger Battalion Airborne Rangers 24th Infantry Division: motto: “Sua Sponte” (Of Their Own Accord), Rangers lead the way. Manuel Joseph Lima Jr. is survived by his loving wife Karla Renee Lima, four children; Steven Richard Tovey, Jessica Rachel Plogger, Alexander Manuel Lima, and Joshua David Lima. Manuel was also a beloved grandfather to five grandchildren; Kaylyn Renee Silk, Matthew David Silk, Bryce Logan Plogger, Addison Grace Plogger, and Lola Skye Tovey. After serving our country as a soldier in war, he came to become a soldier for Christ our Lord. Sergeant First Class Manuel Joseph Lima Jr. became Pastor Manny in 1999, when he began his most honorable mission to not just keep us safe in this world, but to lead the lost to Christ so that they may be saved and welcomed into the Kingdom of Heaven after this world has gone. Pastor Manny served on many missionary trips and planted several churches. He was a pastor, a counselor, a prayer warrior, and a friend to everyone who crossed his path. Even in his final days at the Clarehouse he prayed for families to help them through the loss of their loved ones, he prayed for healing for the staff, and he managed to lead one more young man to Christ for salvation. Even at the end, he never stopped serving our Lord. Viewing will be 10AM-11AM Monday, June 11, 2018 at funeral home. A service celebrating Manuel’s life will be held 12PM Monday, June 11, 2018 at Clifford D Garrett Family Funeral Home Chapel in Fort Gibson with Pastor Randy Loshure officiating. Committal prayers and interment will follow in the Fort Gibson National Cemetery with Gary Johnson officiating. Steven Tovey, Joshua Lima, Justin Plogger, Matthew Silk, Bryce Plogger and Alex Lima will serve as casket bearers. Honorary casket bearers are Alpha Co. 1/279 Inf. 45th Brigade; COL. Chris Chomosh, SGM. Mark McKinsey, SGM. Dean Bridges, SGM. Chap Turley, SGT. John Arney and SGT. Darrell Cusher Our family’s final words to our husband, father, grandfather, brother, and friend are “We’ll Meet You On The Battlefield”. In lieu of flowers, please send donations to Clarehouse, 7617 S Mingo Road, Tulsa, OK 74133 in honor of Manuel Joseph Lima Jr. The family of Manuel Joseph Lima Jr. has entrusted his services and burial to Clifford D Garrett Family Funeral Home, Fort Gibson. 918-478-2555. Online condolences may be left at clifforddgarrettfamilyfh.com

Manuel Joseph Lima Jr. took his final journey and moved to heaven on Tuesday, June 5th, 2018 at the Clarehouse in Tulsa, Oklahoma. Manuel was born on Wednesday, October 12, 1960 in Pawtucket, Rhode Island. He was the only child to his mother,... View Obituary & Service Information

The family of Manuel Joseph Lima Jr. created this Life Tributes page to make it easy to share your memories.

Send flowers to the Lima family.