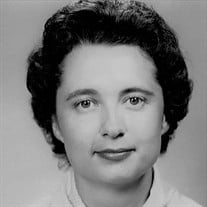 As a young woman Marie, along with her best friends Ernie and Fefe decided to go work for the Army during the end of WWII. If you asked Marie what the worst memories of WWII where she would tell you of the silence just before T-bombs were being dropped. She lived on the top floor of a 3-story building with her mother and she would refuse to seek shelter during air raids. She was either brave or stubborn, my guess would be both. Marie never knew her dad, only his name. However, she did have Uncle Jules in her life and he was a great person. She met Bill Roberts while they both were working for the Army under Colonel Bunker. They married in Frankfurt Germany August 2, 1947. Colonel Bunker escorted Marie down the aisle to give her away. In 1948 Marie and Bill moved to America and had Ronnie. In 1959 Bill and Ron watched as she was sworn in as a legal citizen of the U.S. Marie loved summer vacation going to the Fin and Feather at Ten Killer Lake, or Noel, Mo. as long as the fish were biting, the sun was out, and there was a place to swim she was happy. Marie and Bill enjoyed playing poker once a month for many years with their best friends Steve and Ernie Wilson, and a new story was shared every game. Her favorite trip was when she and Bill took off and went to Deadwood, SD. Bill passed away in 1999, they were married for 51+ years. I'm glad they were able to make that trip together, and it was truly one of her finest memories. Even at 93, Marie's memory was spot on, and just a couple of weeks ago when asked her about her mother, she said she did have a funny story. She said Bill had orders to move to a new location in Germany, but the army made a mistake and listed him as much higher rank than the Sergeant he was. The army issued Bill a jeep to drive and a place for Bill and Marie to live, and her mother came to visit. She said the place looked like a castle, they had servants to cook their meals, they didn't have to do anything but go to work every day. She said it lasted about 2 weeks before the army realized they made a mistake and they had to move. She said her and Bill were very happy with their new apartment but her mom wasn't happy about the move. For several years, before riding in the car became too rough on her, Marie would hop in the car with her son and ride to Missouri to pick up lottery tickets. If there was a major horse race such as the Derby's or Preakness, the car would have to move off the road so she could hear the results. She was pretty good at guessing which horse would win. For Marie everything revolved around Jeopardy and she would remind you of it. Marie was very proud of her grandchildren Eric and Andrea, and always kept up on what they were doing. When they were small she would drive them around Tulsa and to the movies. Marie enjoyed eating out twice a week with her family and friends. She welcomed you into her home with open arms. She was blessed to have had very many true friends and they were blessed as well. She will be missed and remembered every day. She is survived by son, Ron Roberts; grandchildren, Eric Roberts and Andrea (Brett) Robinson; nieces, Suzie, Peggy and Janine; nephew, Pat and their family, her best friend Erna Wilson and family and special friends Brenda, Diane and Robyn. She was preceded in death by her mother Carolina, father in-law John Sr., mother in-law Mary, husband Bill, daughter in-law Rhea, brother-in-law John Jr. sister’s in-law Jean and Bertha and dear friend Noma Fitzgerald. A graveside service will be held at 10 a.m. April 4, 2018 at Ft. Gibson National Cemetery Pavilion with Reverend Randy Shaddox and Chaplain Bill Crow officiating. The family of Marie L. Roberts has entrusted her services and burial to Clifford D Garrett Family Funeral Home, Fort Gibson 918-478-2555. Online condolences may be left at clifforddgarrettfamilyfh.com

As a young woman Marie, along with her best friends Ernie and Fefe decided to go work for the Army during the end of WWII. If you asked Marie what the worst memories of WWII where she would tell you of the silence just before T-bombs were being... View Obituary & Service Information

The family of Marie Louise Roberts created this Life Tributes page to make it easy to share your memories.

As a young woman Marie, along with her best friends Ernie and...

Send flowers to the Roberts family.