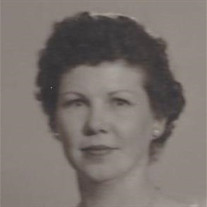 Marjorie Elizabeth Naff passed to the next life shortly before noon on Thursday, July 6, 2017 surrounded by her daughter, son-in-law and grandson at their home in California. Born outside of Fort Gibson, Oklahoma February 20, 1925, Marjorie was the second of seven children born to John Clifton Brown and Ruby Mae Brown. Marjorie graduated from Ft. Gibson High School in 1942. She worked as a civilian at Camp Gruber during World War II and recalled seeing the German and Japanese prisoners of war there. She remembered the Germans marching, and building some of the rock fences. Later, she worked in Muskogee. While visiting her cousin Billye (Mounts) Naff and her husband Paul Naff in Phoenix, Arizona in 1955, Marjorie met and married Paul's brother, Charles Naff, of Indianapolis, Indiana. They moved to Indianapolis where Charles worked for General Motors and where they had one child, Charlotte Melanie. A few years later they moved to Phoenix, Arizona. After Charles passed away while on vacation in Indiana in 1973, Marjorie and Melanie moved to Ft. Gibson. In addition to loving her family, Marjorie adored traveling, gambling, music, cooking, baking and collecting recipes. She had been recuperating at her daughter's home, had recently been to two concerts, 4th of July fireworks and had been looking forward to returning to Ft. Gibson when her passing occurred. She was preceded in death by her husband, her parents, her sister Anna Belle Ragsdale and her brothers Louie Brown, Jack Brown and Billy Brown. She is survived by her sisters Nancy L. Brown of Ft. Gibson and Brownie A. Demmer and her husband David Demmer, of Peoria, AZ; sister in law, Martha Brown of Fort Gibson plus Marjorie's daughter, her son-in-law Scott and her only grandchild, Charlie, whom she loved more than anything; plus many nieces, nephews and cousins. Funeral services will be held 12:30 PM Tuesday, July 25, 2017 in the First Presbyterian Church in Fort Gibson with Reverend Bill Bailey officiating. Committal prayers and interment will follow at Fort Gibson National Cemetery at 2:00 PM. The family of Marjorie Elizabeth Naff has entrusted her services and burial to Clifford D Garrett Family Funeral Home and Cremation Service, Fort Gibson, OK 918-478-2555

Marjorie Elizabeth Naff passed to the next life shortly before noon on Thursday, July 6, 2017 surrounded by her daughter, son-in-law and grandson at their home in California. Born outside of Fort Gibson, Oklahoma February 20, 1925, Marjorie... View Obituary & Service Information

The family of Marjorie Elizabeth Naff created this Life Tributes page to make it easy to share your memories.

Marjorie Elizabeth Naff passed to the next life shortly before...

Send flowers to the Naff family.