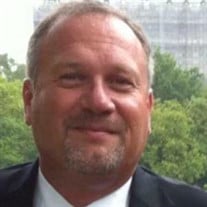 Mark Allen Hill was born on January 6, 1968 to Sharon Kay Hill and Robert Doak. Mark left this world on October 10, 2016 and is survived by his wife Rhonda of the home and two daughters Hannah Alise Hill and Olyvia Allison Hill both of Fort Gibson, three step sons, Mason, Noah, and Tyler Clemons, and one step daughter, Emily England all of Tahlequah. Mark is also survived by his mother Sharon Kay of Muskogee, brother Darrel Harris of Muskogee, sister Heather Doak and brothers Randy and Robert Doak of Tulsa. Mark also leaves behind a dear sweet grandson, Axel Wayne Morris of Fort Gibson and 4 step grandchildren – Madison Clemons, McKinley Whitmire, Michael Whitmire and Kennedy Whitmire. Finally, Mark leaves behind a huge family of dear aunts, uncles, cousins and many friends. Besides his faith in God, family was the very most important thing in Mark’s life. Cooking and being surrounded by his wife, kids and grandkids were the highlights of Mark’s life. Every birthday and holiday, especially Christmas, was an event and Mark often was seen wearing his full Santa suit to the delight of all his grandkids on Christmas Eve. Mark also took his love of family to his church community at Abundant Life Fellowship. For several years he cooked for his church family on Wednesday nights until his illness made it impossible for him to continue this routine. He was an unceasing source of inspiration and had a great heart to serve others. He always made sure the church had plenty of big umbrellas on stock on rainy Sunday mornings, because he was the first one to dash out the door to make sure the ladies of the church could walk inside safely on his arm all dry and comfortable. Mark was a fierce lover of people. He absolutely loved and tried to make all the people in his life, no matter how briefly he may have known, feel special and loved. If he had sat by you in 3rd grade for two weeks and happened to see you in Wal Mart 30 years later, he would jump over a shopping cart to say hi to you and give you a hug. This was just his way. Mark had a quick sense of humor and always kept the people around him in stitches. His heart was just as great and if he heard of you having a problem or knew of someone with a problem in their life, he was quick to jump in and try to make things better. His ingenuity wasn’t limited to helping others, however. Mark had an entrepreneurial spirit and started and sold several businesses throughout his life. Six year ago in May, Mark met Rhonda and all the stars lined up for a magical moment. Both of them knew from the second they laid eyes on one another that they would be together. After dating five months, the couple married on September 15, 2010. Theirs was a classic “beyond your wildest dreams” love story. Mark also loved his job as public relations director of Rivercross Hospice. He made many new friends during his work, and each was always more than merely a business contact. It was his habit to make sure to always let people know they were loved and appreciated through his many act of kindness and encouraging words. Mark lived “larger than life” and although his life was cut short because of cancer, Mark wouldn’t want anyone to be sad, because he’s in God’s glory and out of pain. He was peaceful in his last days and ready to meet Jesus and make Heaven his new place to love people and serve. A visitation will be held Friday, October 14, 2016 at Clifford D Garrett Family Funeral Home in Fort Gibson with the family receiving friends from 5PM-7PM. Funeral services are 10:00AM, Saturday, October 15, 2016 in the Crescent Valley Baptist Church with Reverend Jay Jones officiating. Committal prayers and interment will follow in the Park Hill Cemetery with Ray Potts, Bobby Young, Joe Medlin, Robert Sweptson, Darrell Smart and James Daugherty serving as pallbearers. Honorary pallbearers are William (Bill) Clark, Peter Hernandez, Carl Faith, Doyle Clark, Kevin Clark, Jeff Clark, Troy Clark and Gary Horton. The family of Mark Allen Hill has entrusted his services and burial to Clifford D Garrett Family Funeral Home and Cremation Service 1224 E Poplar Fort Gibson, OK 918-478-2555. Online condolences may be left at clifforddgarrettfamilyfh.com

Mark Allen Hill was born on January 6, 1968 to Sharon Kay Hill and Robert Doak. Mark left this world on October 10, 2016 and is survived by his wife Rhonda of the home and two daughters Hannah Alise Hill and Olyvia Allison Hill both of Fort... View Obituary & Service Information

The family of Mark Allen Hill created this Life Tributes page to make it easy to share your memories.

Send flowers to the Hill family.