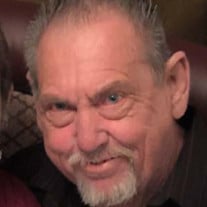 Mark McClellan Jones, 63, was born January 30, 1952 in Long Beach, California to Olen Francis and Anita (Tankersley) Jones and passed away peacefully, Thursday, August 6, 2015 in Tulsa with his loving family by his side. Mark attended schools in California and lost his Mom at an early age. Faced with diversity and many challenges, Mark joined the United States Marine Corps on February 24, 1969. He served his country in Vietnam earning a National Defense Medal along with a Good Conduct Medal. He continued his education with the Marine Corps earning a degree in Aviation Mechanics. Mark received an honorable discharge on March 22, 1972 and continued to work as an aviation mechanic. Mark was an avid poker player. He won a few good jackpots even making the local paper for winning big. He enjoyed the outdoors, taking car loads of kids to the lake to camp and spending time on his boat or sometimes just taking the family for a day of fishing. He loved to golf with his sons, always accepting a challenge. Mark and his wife loved going to the movies on the weekends and eating at the local cafes. Family was Mark’s greatest asset and he leaves a legacy of unconditional love, devotion and a passion for living life to the fullest. Mark’s children and grandchildren were the most important aspects of his life. Mark was preceded in death by his parents, and a son; Mark M. Jones Jr. He is survived by his wife; Kendra (Hinsch) Jones, his children; Anita Williams and husband John, Sandi Hunt and husband CW4 Christopher, Jason Jones, Donnie Jones, Tawney Hiller and husband James, 2Lt Sara Jones, Kenna Mooney and husband SSgt Nickolaus, siblings; Christopher Jones and Larry Jones, grandchildren; Ryan and Kayla Hutchinson, Dylan and Logan Williams, Kieran Hunt, Olivia, Crystal and Haven Jones, Sebastian Jones, Trinity Lapp-Hiller, Athena and Jackson Mooney and a soon to be born great-grandchild Baby Hutchinson. A celebration of Mark's life will be held at 1:00PM, Friday, August 14, 2015 at the Fort Gibson National Cemetery in Fort Gibson, Oklahoma with Reverend Forrest L. Kirk officiating. The family of Mark McClellan Jones has entrusted his services and burial to Clifford D Garrett Family Funeral Home and Cremation Service 1224 E Poplar Fort Gibson, OK 918-478-2555. Online condolences may be left at clifforddgarrettfamilyfh.com

Mark McClellan Jones, 63, was born January 30, 1952 in Long Beach, California to Olen Francis and Anita (Tankersley) Jones and passed away peacefully, Thursday, August 6, 2015 in Tulsa with his loving family by his side. Mark attended schools... View Obituary & Service Information

The family of Mark McClellan Jones created this Life Tributes page to make it easy to share your memories.

Send flowers to the Jones family.