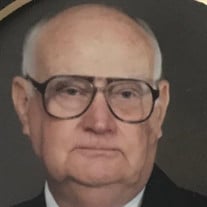 On Sunday, March 29, 2020, Melvin Dean Gloden, loving husband and father of six boys, was united in Heaven with his Lord and Savior at the age of 85. Dean was born on February 16, 1935 in Elkhart, Kansas to Bart and Dorothea Gloden. He was raised on a farm in Texas County in the Oklahoma Panhandle. He attended grade school at Richland Center, Jr. High at Elkhart and in 1953, he graduated from Yarbrough High School. After high school, Dean attended Oklahoma State Tech in Okmulgee, Ok studying Diesel Mechanics. It was here he met the love of his life, Linda Marie Miller. He left Okmulgee to attend Baptist Bible College in Springfield, MO for one year before returning to Okmulgee and was married to Linda on December 24, 1957. During their 62 wonderful years together, they provided a Godly home for their sons, Steven, Melvin Jr, Mark, Alan and Joel as well as their grandchildren and great grandchildren. Dean was employed by Curt’s Oil Company from 1959-1979. He left Curt’s to follow his passion of farming from 1979-1987. He went on to work at Whitlock Packaging in Ft. Gibson until his retirement in 2000. After retirement, Dean enjoyed fishing, woodworking, tinkering with anything that needed fixing and watching Oklahoma Sooners football and basketball. He leaves behind cherished memories of sharing these hobbies with his family and friends. He was known for his quick wit, sly grin and hilarious one-liners. He was a born-again Christian, accepting Christ in 1955 at Fellowship Baptist Church in Okmulgee. He served the Lord faithfully for many years teaching Sunday School and leading music. Dean loved his church family at Eastland Baptist Church where he was a member for 34 years. He was a quiet man with strong convictions who valued his family above all things and was loved by those who knew him. Dean was preceded in death by his parents, Bart and Dorothea Gloden; son, Timothy David Gloden; brothers, Emerson Lee and Kenneth and sister Maxine Fowler. Those left to celebrate his life include his wife Linda, their sons Steven (Rhonda), Melvin Jr. (Sharon), Mark (Kathy), Alan (Shelly) and Joel (Mary Gonzales). Dean will be fondly remembered by his grandchildren Melanie Dipprey (Jason), Melissa Blundell (Brad), Dara Gloden, Devonie Melnik (J.C.), Michael, Myles and Matthew Gloden, Laura Loomis (Josh), Krista Thompson (David), Anna, and Hailey Gloden. His great grandchildren are Joey Melnik, Lynlee, Lacey and Landrie Dipprey, Kylie and Keira Blundell, Brooklyn, Evelyn and Raelyn Loomis and Paityn Thompson. His siblings that have precious memories of him are his brother Bobby (LoRee) and sister Imogene Hetzel. Dean also leaves behind many nieces, nephews and friends that were honored to be loved by him. A private family service will be held at Citizens Cemetery with Pastor Phillip Housely officiating. A memorial service to honor Melvin’s life will be held at a later date. Family request no flowers at this time. The family of Melvin Dean Gloden has entrusted his care, service and burial to Clifford D Garrett Family Funeral Home, Fort Gibson. 918-478-2555. Online condolences may be left at clifforddgarrettfamilyfh.com

On Sunday, March 29, 2020, Melvin Dean Gloden, loving husband and father of six boys, was united in Heaven with his Lord and Savior at the age of 85. Dean was born on February 16, 1935 in Elkhart, Kansas to Bart and Dorothea Gloden. He was... View Obituary & Service Information

The family of Melvin Dean Gloden Sr. created this Life Tributes page to make it easy to share your memories.