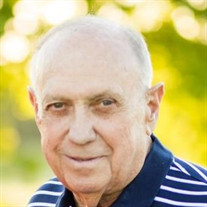 Melvin Ray Hardy, 78, of Fort Gibson was born May 5, 1940 in Phillip, MS to Vernon Fred and Edgle Cristeen (Camp) Hardy and peacefully passed away Tuesday, March 26, 2019 in Tulsa with his loving family by his side. Melvin served four years in the Air Force stationed at Elgin Air Force Base in Florida. There he served as assistant crew chief on SAC bombers. Following his honorable discharge, Melvin went into the agricultural business where he managed numerous grain elevators in Mississippi, Alabama and Oklahoma. Not a lot was required to make Melvin happy. He had various interests at different times in his life. At one time he did a little woodworking and fishing. Whenever possible, he loved to be on the go. Whether out to eat, to ballgames, or on family trips, just say “go” and he was ready. Not only did he enjoy the sights we went to see, but the many interesting conversations he initiated with people along the way. In every aspect of his life Melvin was known as a “people person”. Whether he knew you or not, he was going to talk to you. By the time the conversation was over, he knew at least who you were, where you lived, your occupation, and usually a lot more. Despite the person’s circumstances or what they looked like he was interested in what they had to say. During several years of deteriorating health, Melvin made an indelible impression on so many people because of his positive attitude. From family to friends to doctors, time was spent enjoying his relationship with them instead of being dispirited by his physical condition. One of the most obvious things to anyone knowing Melvin was that he loved his family. He grew up with five siblings who were always close. When he married and had children and grandchildren his happiness was not dependent upon his wants and needs but on theirs. He truly gave unconditional love to his family. The gift was not wrapped in a fancy package but it has endured through the years and will always continue in our memories. Melvin is survived by his wife; Katherine of the home; son, Jeff Hardy and wife Amy; daughter, Katrina Whiteday and husband Greg; granddaughters, Anna Hardy, Abigail and Emsley Whiteday; grandson, Fletcher Hardy; sisters, Dean Harris of Huntsville, AL., Gay Moorehead and husband Milton of Issaquah, WA; brother, Danny Hardy and wife Mary Ann of Stuttgart, AR; numerous nieces and nephews and many friends. Preceded in death by his parents; Vernon & Edgle Hardy; sister, Marion Bailey; brother, Kim Hardy. A memorial service celebrating Melvin’s life will be held 11AM Thursday, April 4, 2019 at Southeast Baptist Church in Muskogee with Pastor Mike Murray and Pastor Steve Moss officiating. Inurnment will follow at Fort Gibson National Cemetery, Fort Gibson, Oklahoma with military honors. The family of Melvin Ray Hardy has entrusted his cremation and service to Clifford D Garrett Family Funeral Home and Cremation Service, Fort Gibson, Oklahoma. Online condolences may be left at clifforddgarrettfamilyfh.com

Melvin Ray Hardy, 78, of Fort Gibson was born May 5, 1940 in Phillip, MS to Vernon Fred and Edgle Cristeen (Camp) Hardy and peacefully passed away Tuesday, March 26, 2019 in Tulsa with his loving family by his side. Melvin served four years... View Obituary & Service Information

The family of Melvin Ray Hardy created this Life Tributes page to make it easy to share your memories.

Send flowers to the Hardy family.