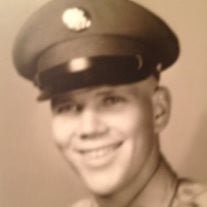 It all began November 21, 1944. Melvin Osborne Jr. was born to Melvin Sr. and Betty (Schilt) Osborne in Muskogee, Oklahoma. He passed from this earth, to his rewards on March 17, 2014 in Muskogee, Oklahoma. Melvin “Butch” as he became affectionately known as at a young age by his father, grew up in Muskogee, Oklahoma. He attended Muskogee Public Schools. He left at age 17 to serve his country in the United States Army in 1962. He did his basic training in Fort Leonard Wood, MO, before being stationed in Germany. It was in Germany that he met and fell in love with his soul mate for life, Eileen O’Brien. They married December 12, 1964, in Ireland. Melvin was honorably discharged from the Army in 1965. They relocated back to Muskogee before settling in Fort Gibson, Oklahoma where they remained. Melvin spent many years working in the mining industry, learning the explosives business. He started work for Arkhola in 1972, working the underground mine. Spending many years in that field, he later went to work for Buckley Powder Company, who he regarded as not just an employer, but family. Melvin was also called to preach at a young age, and was ordained as a Southern Baptist Minister. He settled as Pastor for Bethel Baptist Church, where he remained since 1985. He was also a 32nd degree Master Mason, a bond he shared with both his father and his youngest son, Paul. Melvin touched many lives in his time here on earth, and he never met a stranger. Everyone who met him was always touched by his kindness and generosity. Even in his last few months battling illness, he was always thinking of his beloved wife and family first. Our hearts will never mend his loss. Melvin was preceded in death by his beloved grandmother, Cora Mae Gaither, and his parents Melvin Sr. and Betty Osborne. Those left here to cherish his memory are his wife of 49 years, Eileen Osborne of the home, his four sons, Gerald and Beth Osborne of Pryor, Oklahoma, Mike and Kimberly Osborne of Tulsa, Oklahoma, David and Rebecca Osborne of Muskogee, Oklahoma, Paul and Dawn Osborne also of Muskogee, Oklahoma, seven grandchildren; Sarah, Emily, Stephen, Courtney, Andrew, Kathryn, and Marissa, step grandchildren; Keifer Arnold and wife Stephanie of Muskogee, Oklahoma, Damian Hammer of Independence, Kansas, and a lifetime of friends. We love you Dad. Rest in peace, sweet prince. A visitation will be held Sunday, March 23, 2014 with the family receiving friends from 3:00PM to 5:00PM at Clifford D Garrett Family Funeral Home in Fort Gibson. A celebration of Butch’s life will be held Monday, March 24, 2014 at 11:00AM at First Baptist Church in Fort Gibson with Brother Ron Dean officiating. Interment will follow at the Fort Gibson National Cemetery with Mark Ford, Mike Berkenbile, Jason Herron, Kevin Godwin, Dr. Mike Nelson, and Scott Smith serving as casket bearers. Honorary casket bearers are Ray Rainey, Bob Ballard, Michael Dean, and Danny Younce. In lieu of flowers, the family asks that you make donations in Butch’s name to St. Jude Children’s Research Hospital at www.stjude.org/donate. The family of Melvin “Butch” Osborne Jr. has entrusted his services and burial to Clifford D Garrett Family Funeral Home 1224 E Poplar Fort Gibson, OK 74434 (918)478-2555. Online condolences may be made at clifforddgarrettfamilyfh.com

The family of Melvin "Butch" Osborne Jr created this Life Tributes page to make it easy to share your memories.

Send flowers to the Osborne family.