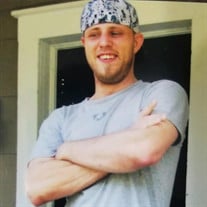 Michael Shane Basham, 44, of Fort Gibson was born June 4, 1976 in Muskogee, OK to Paul Basham and Sharon Seay and peacefully passed away Friday, August 14, 2020 in Tulsa, OK. Michael grew up in Fort Gibson where he attended school. He was a... View Obituary & Service Information

The family of Michael Shane Basham created this Life Tributes page to make it easy to share your memories.

Send flowers to the Basham family.