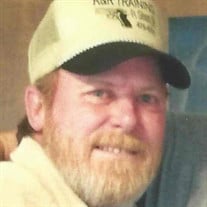 Michael Wayne Stewart, 59, of Muskogee, formerly of Fort Gibson was born February 20, 1961 in Muskogee, OK to Theodore and Shirley (Torix) Stewart and peacefully passed away Tuesday, April 14, 2020 in Tulsa, Oklahoma. Michael was a licensed plumber/pipefitter for many years. He loved being outdoors in the woods. His passion was deer hunting, fishing and watching the Bald Eagles soar at the Fort Gibson dam. Spending time with his family was his most important attribute. His love for his family and friends was evident in everything he did. Michael will be missed by many. He was preceded in death by his parents; son, Jason Patrick Stewart; step-children, Ralph and Gary Orman. He is lovingly survived by his wife; Freda Stewart of the home; sister, Debra Pease Brewer of Fort Gibson; brother, Gary Stewart and his wife Patricia of Fort Gibson; stepdaughter, Mandy Maxwell of Muskogee; stepsons, Kyle Maxwell and his wife Tonya of Fort Gibson and Michael Reich and his wife Andrea of Fort Smith, Arkansas; granddaughter, Baylee Stewart; grandson, Levi Stewart both of Fort Gibson; several step-grandchildren and great grandchildren and many nieces, nephews, cousins and a many friends. A private graveside will be held at Citizens Cemetery in Fort Gibson, Oklahoma with Robert Jackson officiating. The family of Michael Wayne Stewart has entrusted his care, service and burial to Clifford D Garrett Family Funeral Home, Fort Gibson, OK. 918-478-2555. Online condolences may be left at clifforddgarrettfamilyfh.com

The family of Michael Wayne Stewart created this Life Tributes page to make it easy to share your memories.

Send flowers to the Stewart family.