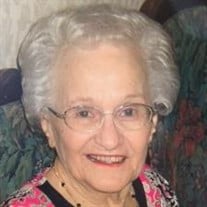 Mildred Louise (Coffman) Lawson, 87, of Muskogee, was born March 28, 1928 in Okmulgee, OK to Carl and Eula (Noblitt) Coffman and passed from this life on November 27, 2015 in Muskogee. Mildred graduated from Tahlequah High School and attended nursing school for one year in Muskogee. Mildred married Jewell J. Lawson on July 23, 1949 in Muskogee, OK. They moved to Oklahoma City and raised five children there. They moved back to Tahlequah after Jewell retired from Tinker Field Air Force Base. Mildred was an avid reader and loved to work crossword puzzles. When the game Trivial Pursuit came along, everyone wanted her on their team. She loved being around people and volunteered at the gift shop at Tahlequah City Hospital. She moved to Muskogee in September of 2010 and enjoyed her life and friends at Country Gardens Assisted Living. She could be found most every evening playing dominoes with her friends. A special thanks to all that cared for her there for the last five years. Mildred loved her church family at New Community. She was preceded in death by her parents, one brother Carl J. Coffman and her husband Jewell, who passed away October 2, 1998. Mildred is survived by four sons and a daughter, Jerry Lawson and his wife Debbie of OKC, David Lawson and his wife Renee of Bethany, Kenneth Lawson and his wife Rita of Glenpool, Shirley Heirich and her husband Marc of Fort Gibson, and Paul Lawson and his wife Angela of Tahlequah; ten grandchildren, Misti Calvitti, B.J. Lawson, Tommy Lawson, Ashley Ray, Gina Guinn, Tony Lawson, Rick Lawson, Jenifer Blackmon, Angie Vick, Clayton Kinard, and eleven great grandchildren, Cooper, Parker, Brecker, Malechi, Xander, Dominick, Jayden, Liam, Tucker, Millie and Daniela. Mom, Grandma, and Great-Grandma will be greatly missed. A visitation will be held Monday, November 30, 2015, with the family receiving friends 5PM-7PM at the Clifford D Garrett Family Funeral Home in Fort Gibson. A private family graveside service will be held at the Tahlequah City Cemetery in Tahlequah, OK. The family of Mildred Louise Lawson has entrusted her services and burial to Clifford D Garrett Family Funeral Home and Cremation Service 1224 E Poplar Fort Gibson, OK 918-478-2555. Online condolences may be left at clifforddgarrettfamilyfh.com

Mildred Louise (Coffman) Lawson, 87, of Muskogee, was born March 28, 1928 in Okmulgee, OK to Carl and Eula (Noblitt) Coffman and passed from this life on November 27, 2015 in Muskogee. Mildred graduated from Tahlequah High School and attended... View Obituary & Service Information

The family of Mildred Louise (Coffman) Lawson created this Life Tributes page to make it easy to share your memories.