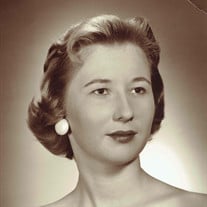 Norma “Jeannie” Davis was born December 13, 1938 in Omaha, Nebraska to O.D. and Dorothy (Watson) Mulkey and passed away peacefully at her home Thursday, November 9, 2017 in Braggs, OK. Jeannie met and married the love of her life, Dewey D. Davis on July 4, 1957 in Corpus Christi, Texas. Their union blessed them with two sons. Jeannie received an Associate’s Degree from Connors State College in Warner, OK and a Bachelor’s degree from Northeastern State University in Tahlequah, OK. Jeannie was an accountant at the VA Hospital and retired in 2003. She was a faithful member of the Braggs United Methodist Church for many years. She was also a member of the American Legion Auxiliary Post 233 and was accepted to Phi Beta Kappa. She enjoyed long walks, swimming, traveling, boating with Dad. She made sure her boys had everything they needed and encouraged them to succeed in all of their aspirations. Jeannie was proceeded in death by her parents; brother, Tom Mulkey; and grandson, Cameron Davis. She is survived by her husband, Dewey of the home; sons, James D Davis of Braggs, OK and Jeffrey D Davis and wife Jodi of Clovis NM; grandsons, Ryan M Davis and wife Heather and daughter Blythe of Yuma, AZ and Sean Davis of Spokane, WA; sister, Billie Cook of Arkansas City, KS; many nieces, nephews, great nieces and great nephews and many friends. In lieu of flowers donation may be made in Jeannie’s name to the American Legion, Post 233 Braggs, OK 74423 or the Braggs United Methodist Church 220 Adams St Braggs, OK 74423. A visitation will be held Monday, November 13, 2017 at the Clifford D Garrett Family Funeral Home in Fort Gibson with the family receiving friends from 5PM-7PM. Funeral services are 1:00PM Tuesday, November 14, 2017 at the United Methodist Church in Braggs with Pastor Marty Hern officiating. Committal prayers and interment will follow at South Bethel Cemetery with Sean Davis, Jeff Davis, Bob Redenius, Ron Redenius, Brett Bennett and Micah Bennett serving as casket bearers. A lunch will be held at the Braggs American Legion Building at 11:00AM preceding the funeral service. The family of Norma “Jeannie” Davis has entrusted her care, services and burial to Clifford D Garrett Family Funeral Home, Fort Gibson 918-478-2555 Online condolences may be left at clifforddgarrettfamilyfh.com

Norma &#8220;Jeannie&#8221; Davis was born December 13, 1938 in Omaha, Nebraska to O.D. and Dorothy (Watson) Mulkey and passed away peacefully at her home Thursday, November 9, 2017 in Braggs, OK. Jeannie met and married the love of her life,... View Obituary & Service Information

The family of Norma "Jeannie" Davis created this Life Tributes page to make it easy to share your memories.

Send flowers to the Davis family.