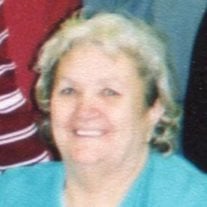 Norma Marie (Cunningham) Rolland, known by everyone as Momma was born September 22, 1936 in Onapa, OK to James and Jessie (House) Cunningham and joined her husband Don in heaven on Saturday, January 11, 2014 in Fort Gibson, OK at the age of 77. Norma spent her school years in Kern County, California and graduated from Maricopa High School. Norma married the love of her life Donald on February 4, 1955 in Old River, California and they made their home in Pumpkin Center, CA. After starting a family they decided to move to Oklahoma choosing Fort Gibson to raise their kids. Momma began a career at the Thouvenel Café in Fort Gibson as a waitress. Before long she knew everyone that came in and what their orders were and would have it ready for them when they arrived. She worked there until its closing. Norma later opened Rolland Feed Store in Fort Gibson which she owned and operated for many years with her Family, and was a very proud supporter of the Fort Gibson FFA. Momma considered being a Mom and Wife was the most important job a Lady could have and was the best at both. Many holidays and summers were spent camping at the lake. Momma was an exceptional bowler but an even better pool player. She loved to garden, was as excellent cook, an avid bingo player and was well versed in the art of arguing with anyone if she felt she was right. Norma Marie Rolland is lovingly survived by her children; Diana Sparks and husband Jimmy of Fort Gibson, OK, Terry Rolland of Beggs, OK, Pam Easton and husband David Holeman, W. David Rolland of Fort Gibson, OK, and friend Deborah Griego of Wagoner, OK, Sammy Rolland and wife Malinda, all of Fort Gibson, OK, Tammy Williamson and husband Charles of Gore, OK, James Rolland and friend Randy Tufford of Tulsa, OK, Scott Rolland and friend Cindy Tackett of Muskogee, OK, numerous grandchildren, nieces, nephews and cousins, sisters; Betty Wilson of Sanger, CA, and Patsy Sue Daily of Vidalia, CA., a brother; Billy Jack Cunningham of MO, an aunt; Eula Mae “Sissy” Jackson of Ada, OK, uncles; Gene Jennings of Fort Gibson, OK, Vester Jennings of Roland, OK, and John “Dub” Jennings of CA., sister-in-laws; Sandra Gilliam, Martha Shipley and Barbara McFarland all of Fort Gibson, OK. and a host of friends. Momma was preceded in death by her parents, her husband; Donald “Donkey” Rolland on July 15, 2013, grandsons; Christopher Rolland and Zachary Fry, a sister; Dolly Jean Mize, a brother; Jerry Cunningham, an uncle; John Louis Jennings Jr. The Rolland Family would like to thank the staff at Fort Gibson Nursing Home for all the love, support and care for our Mom, along with Tahlequah City Hospital Staff and Hometown Hospice. A visitation will be held Tuesday, January 14, 2014 with the family receiving friends from 5PM-7PM at Clifford D Garrett Family Funeral Home in Fort Gibson. A celebration of Norma’s life will be held at 2PM, Wednesday, January 15, 2014 at First Baptist Church in Fort Gibson with Reverend Tony Shaw officiating, Interment will follow at the Citizens Cemetery in Fort Gibson with her grandsons; Greg Sparks, Jared Sparks, Nathan Rolland, Keith Williamson, “Tooter” James Lambert and Troy Simmons serving as casketbearers. Honorary casketbearers will be Peck Eubanks, Brent Muck and Mike Drosselmeyer. The family of Norma Marie Rolland has entrusted her care and services to Clifford D Garrett Family Funeral Home 1224 E Poplar, Fort Gibson, Ok 74434, (918)478-2555. Online condolences may be made at clifforddgarrettfamilyfh.com

Norma Marie (Cunningham) Rolland, known by everyone as Momma was born September 22, 1936 in Onapa, OK to James and Jessie (House) Cunningham and joined her husband Don in heaven on Saturday, January 11, 2014 in Fort Gibson, OK at the age of... View Obituary & Service Information

The family of Norma "Momma" Marie Rolland (Cunningham) created this Life Tributes page to make it easy to share your memories.

Norma Marie (Cunningham) Rolland, known by everyone as Momma...