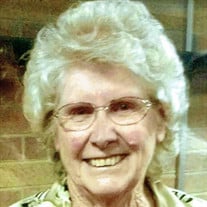 Okla Odessa (Martin) Walters was born on August 6, 1931 in Braggs, Oklahoma to Paul & May (Hornback) Martin and passed on to her heavenly home on Sunday, January 14, 2018 surrounded by her family. The oldest of nine children, Okla was raised in the Fort Gibson area. On December 15, 1949 she married Loyd Walters and spent the next 37 years raising their family in the Fort Gibson area as well as several moves to the farming country in California. Okla worked for Fort Gibson Public schools in the cafeteria as a cook and later as a custodian at the Elementary South where all of the kids and teachers alike referred to her as Ms. Okla until her retirement in 1994. She then began a 20 year service as an election worker for the Muskogee County Election Board. Okla was charter member of Calvary Faith Church in Fort Gibson from the age of 14 where she could be found every Sunday morning, evening and Wednesday night, only missing if she was on one of her trips to Branson. She was a Sunday school teacher for 30 years. Anyone who needed prayer from her received it! The greatest joy in her life was her family. Each Sunday after church you could find her along with her children, grandchildren, extended family and whoever else stopped by having Sunday dinner at her home. Her mashed potatoes and chicken & dressing were always a hit! If you went to Granny’s house, you knew you would never leave hungry! She always made sure to attend every graduation, wedding, birthday party, school activity, family reunion or other major events in her kids, grandkids, and family’s lives. Okla was preceded in death by her husband of 37 years Loyd Walters, her parents Paul & May Martin, one sister Lenora Mendell, two sons in law, Jimmy Cook & Leonard Woods, and her grand dogs that she would dog sit, Angel & Lil’ Bit. Left to cherish her memory are her children Etta (Jim) Raley, Fran Woods, Paul Walters, & Virgil (Pam) Walters, all of Fort Gibson. Her grandchildren Torrie (Chip) Sellers, Tracy (Jayme) Cook, Terry (Melissa) Cook, Levi Sims, Josh(Danielle) Rinehart, Eric (Tabby) Walters, great grandchildren Michael (Amanda) Perry, Grant (Heather) Perry, Amy Cook, Emily Sellers, Alyson Cook, Keely Bass, Bailey Walters, Ashton Walters, & Aiden Cook. Great great grandchildren Abigail Perry, Preston Perry, & Gabriel Perry. Two Brothers Dewain (Nancy) Martin & Wesley (Pam) Martin, five sisters Elva Worley, Patsy Dixon, Lavada Jennings, Mary Sue Speer, & Janie (Gene) Brown. A visitation will be held Tuesday, January 16, 2018 with the family receiving friends 5PM-7PM at the Clifford D Garrett Family Funeral Home in Fort Gibson. Funeral services for Okla will be held 10:00AM Wednesday, January 17, 2018 at Trinity Family Worship (Old Calvary Faith Church) in Fort Gibson, Oklahoma with the Reverend Fred Huffman & Billy Rains officiating. Committal prayers and interment will follow at Fort Gibson Citizens Cemetery with her grandsons serving as casket bearers. The family of Okla Odessa Walters has entrusted her care, services and burial to Clifford D. Garrett Family Funeral Home Fort Gibson 918-478-2555. Online condolences may be left at clifforddgarrettfamilyfh.com

Okla Odessa (Martin) Walters was born on August 6, 1931 in Braggs, Oklahoma to Paul & May (Hornback) Martin and passed on to her heavenly home on Sunday, January 14, 2018 surrounded by her family. The oldest of nine children, Okla was raised... View Obituary & Service Information

The family of Okla Odessa Walters created this Life Tributes page to make it easy to share your memories.

Send flowers to the Walters family.