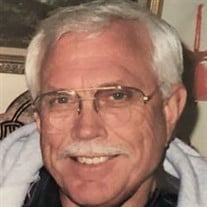 Pat Edward Nobles, 86, of Broken Arrow, Oklahoma was born October 3, 1933 in Childress, Texas to Clarence and Ida Mae (Tillery) Nobles and passed away peacefully Saturday, February 8, 2020 in Muskogee, Oklahoma. He received his formal education in the Texas Public School system. Pat continued his education, at George Peabody College and Wayland University in Texas where he received his Bachelor’s Degree, and a Master’s Degree at West Texas State University. A child of the Depression, Pat began to write in Junior High School. His family were lifelong railroad people dating back to just after the Civil War. Newspapers were the first area of exposure to the public. The 1960’s were his magazine days working for the Pulps. Western and Detective magazines published his stories. The people of this time period have been his interest. Pat wrote a book about his life and appropriately named it An Adventurous Life. Pat joined the United States Marine Corp on February 20, 1953 serving during the Korean War and was honorably discharged September 30, 1955 as a Corporal. He met and married the love of his life, Mary E. Weatherford in Tulsa, Oklahoma. A marriage that stood the test of time over 40 years. For the last 45 years Pat was an Art Teacher for Tulsa, Broken Arrow and Catoosa School System. He was an avid Dallas Cowboys fan. Pat is lovingly survived by his wife Mary of the home; daughter, Tracie Johnson and husband Joe of Manito, Illinois, OK; son, David Nobles of Bronte, Texas; step-daughter, Kasa Watson of Muskogee, OK; step-sons, Kyle McCasling of Broken Arrow, OK and Kevin McCasling of Tulsa, OK; granddaughters, Anna Smith of Paris, Texas, Amanda Kindall of Winger, MN and Jodi Sallis of Fort Gibson, OK; and a grandson, Colin Watson of Muskogee, OK. He was preceded in death by his parents and sister, Shirley. A graveside service Celebrating Pat’s life will be held 2PM Tuesday, February 11, 2020 at Fort Gibson National Cemetery Pavilion in Fort Gibson, OK. The family of Pat Edward Nobles has entrusted his care, service and burial to Clifford D Garrett Family Funeral Home, Fort Gibson, OK. 918-478-2555. Online condolences may be left at clifforddgarrettfamilyfh.com

The family of Pat Edward Nobles created this Life Tributes page to make it easy to share your memories.

Send flowers to the Nobles family.