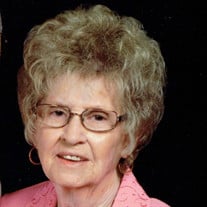 Patricia Brooks (Chenault) Martin, 76, was born on March 5, 1941 in Portales, New Mexico and was called to Heaven on Monday, January 8, 2018 at her home in Webbers Falls, OK. Tricia was born the oldest daughter of Alton and Mabelle Chenault who were dairy farmers and taught her what a good farm girl should be. She was a graduate of Muskogee High School. She met and married the love of her life Belvie Martin on December 24, 1959. They were blessed with twin boys, Dale & Dean Martin. Pat was the consummate wife and mother and when her boys started school, she began working at First National Bank and later earned her real estate license and was a successful Avon representative. She began working for the district court in Tahlequah, working for Judge Mark Dobbins until her retirement in 2002. Honesty, integrity and dependability were traits she and Belvie shared. When the weather turned, Belvie would drive her to work and pick her up each evening. For any who knew her, Pat was a lady of utmost class and character and she worked to instill the importance of family. First her children, then grandchildren and of late, her great grandchildren. Pat and Belvie were active in Chandler Road Church of Christ and were avid supporters of FFA, OHP and every activity their family took part in. Pat, her sister Lenora and their mother Mabelle taught the generations how to cook, sew, garden, can and above all, to love and support one another. She was proceeded in death by her beloved husband, Belvie; sister, Lenora Atchison; great-granddaughter, Mackenzie Dallis; her parents; Alton and Mabelle Chenault. She is survived by her sons; Dale Martin and wife Avonne of Webbers Falls, Dean Martin and his wife Patricia of Woodall; grandchildren, Leslie Dallis and her husband Jessie, Lindsey Dillard and her husband Neal, Joshua Martin, Lauren Barnes and husband Cody, Shelby Nichols and husband TJ, Renee Sierra and husband Paco, Cody Martin and wife Marta; great grandchildren; Amanda Dallis, Taylor and Breanna Sierra, Sawyer and Dax Martin, Emma Grace and Gavin Dillard, Raelynn and Rosslynn Martin, Alden Jones, Freedom and Navi Barnes, Lily Nichols, Thea and Gabe Martin; Aunts, Trixie Montaque and her children; Ronnie, Ray, Algene and Clydean of Clovis, New Mexico. The family wishes to extend a sincere thank you to all who helped provide care, especially the staff of Carter Hospice, Amanda Silberzahn RN-CM, Chaplain Kevin Webster, Tara Atchison LPN, Betty Compton LPN, Misty Scott CH-HA and Jana Lawson MSW and their wonderful private duty staff; Shelly Qualls, Sherri Dalley, Yvonne Johnson, Angie Montgomery and Anna Lou Muskrat and for their seamstress, Bobbie Jones for the many pieces of clothing she shortened. A visitation will be held Thursday, January 11, 2018 in the Clifford D Garrett Family Funeral Home in Fort Gibson with the family receiving friends from 5PM-7PM. Funeral services are 1:00PM Friday, January 12, 2018 at the Chandler Road Church of Christ with Chaplain Kevin Webster officiating. Committal prayers and interment will follow at Memorial Park Cemetery with Darrell Atchison, David Atchison, Cody Barnes, Neal Dillard, TJ Nichols, Jessie Dallis, Paco Sierra and Cody Skye Martin serving as casket bearers. Honorary casket bearers are Samuel Mark Atchison, Robert Martin, James Martin, Joshua Martin and JC Dotson. The family of Patricia Brooks Martin has entrusted her care, services and burial to Clifford D Garrett Family Funeral Home Fort Gibson. 918-478-2555 Online condolences may be left for the Martin family at clifforddgarrettfamilyfh.com

Patricia Brooks (Chenault) Martin, 76, was born on March 5, 1941 in Portales, New Mexico and was called to Heaven on Monday, January 8, 2018 at her home in Webbers Falls, OK. Tricia was born the oldest daughter of Alton and Mabelle Chenault... View Obituary & Service Information

The family of Patricia Brooks (Chenault) Martin created this Life Tributes page to make it easy to share your memories.

Send flowers to the Martin family.