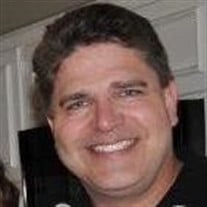 "Greg O’Hagan, beloved husband, father, son, brother and friend died October 9, 2015 at the age of 50. Born September 10, 1965, Greg grew up in Irving, Texas. He attended Holy Family Elementary and Cistercian Preparatory Academy. Greg was gifted athletically, intellectually and with leadership. He was an all-state athlete in football, soccer and track. The first time he stepped on a football field his freshman year of high school, he booted a 48-yard field goal which won the game. He was the first player to crack 1,000 yards rushing in a season at Cistercian. In addition to being captain, he was senior class president. Following high school, Greg attended the University of Texas where he became a lifelong Longhorn fan. After graduation, he spent many years working in the semi-conductor and insurance sales industries. Greg married Mary Nelms on Texas/OU weekend 1995. Together they had two precious daughters, Clare and Katie. Greg loved his family, friends, dogs, Longhorn football, building and fixing things, playing guitar, working on cars, and listening to “The Ticket.” He is survived by his wife and two daughters; parents: Patrick and Patricia Hasler O’Hagan; three siblings, Chris, Shannon (Al Lopez) and John. Additionally, there are numerous uncles, cousins, nieces, nephews, sisters-in-law and brothers-in law, and mother and father in law. He was loved by many. A special thanks to Uncle John Hasler for his amazing friendship and support. In lieu of flowers, please make donations to Cistercian Prep School or Ursuline Academy in Greg O’Hagan’s name."

The family of Patrick "Greg" O'Hagan created this Life Tributes page to make it easy to share your memories.

Send flowers to the O'Hagan family.