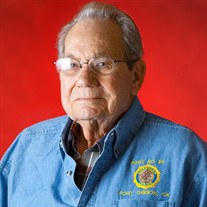 Ralph Dale Armstrong was born on July 8, 1932 in Sasakwa, Oklahoma to Dalton and Retha (Ramsey) Armstrong. On Tuesday, October 8, 2019 he passed away peacefully at Tahlequah City Hospital at the age of 87, his son and daughter by his side as he left his earthly home and entered into the gates of Heaven to his everlasting home. After graduation from high school in 1950 he made the decision to enlist in the military and proudly served his country in the Navy during the Korean War from August 10, 1951 to August 4, 1955 on the USS John R. Craig DD-885. He married the love of his life Anna Lee Torix on May 25, 1953 in San Diego, California. In December of 1957 they were blessed to welcome their first child and son, Clayton Dale Armstrong. In January of 1962 they were blessed once again with the birth of their daughter, Tonya Kim Armstrong. In 1965 he moved his family east of Fort Gibson and bought a simple country home along with 20 acres. There are so many memories we have growing up on those country roads with our precious dad. Ralph retired from Southwestern Bell Telephone Company in 1988. He was a devoted member of the Fort Gibson First Baptist Church and took an active role as Youth Director, Sunday School Director and Sunday School Teacher. He rarely missed a Sunday at church until the last few years due to declining health and caring for his beloved wife. He was also a very faithful and passionate volunteer at the Frank Gladd American Legion Post #20 in Fort Gibson, Oklahoma. Among some of his favorite things were most definitely music, singing and playing his guitar. His love for his family and friends were beyond measure. Proceeding him in death are his parents; Dalton and Retha Armstrong; and brother, Bobby Armstrong. He leaves behind to cherish his memory; wife, Anna Lee Armstrong of 66 years; son, Clayton Armstrong and wife Toni; daughter, Tonya Bowden and husband David; sister, Charlene Ross of Mulvane, Kansas; grandchildren, Jarrod Armstrong, Kevin Armstrong and wife Memory, Ryan Bowden and wife Jennifer, Jillian Cooper and husband Levi, Amanda Napier, Melissa Laurenceau and husband Christophe, Sydni Touchet and husband Jeff and special sister in laws, Josephine Nelson and Faye Armstrong. A visitation will be held from 1PM-6PM Sunday, October 13, 2019 at Clifford D Garrett Family Funeral Home, Fort Gibson, Oklahoma. A service celebrating Ralph’s life will be 11AM Monday, October 14, 2019 at the First Baptist Church in Fort Gibson with Pastor Nate Capps officiating. Committal prayers and interment will follow at Holland Cemetery, Woodall, Oklahoma with Ryan Bowden, Kevin Armstrong, Jim Price, Transic Armstrong, Levi Cooper and Ronnie Holuby serving as casket bearers. David Bowden and Bill Chancellor will serve as honorary casket bearers. Military honors will be observed. In lieu of flowers the family request that donations be made in Ralph’s name to St. Jude Children’s Hospital, 501 St. Jude Place, Memphis Tennessee, 38105 or you may make donations online at stjude.org/donate or by calling 1-800-876-4302. The family of Ralph Dale Armstrong has entrusted his care, service and burial to Clifford D Garrett Family Funeral Home, Fort Gibson. 918-478-2555 Online condolences may be left at clifforddgarrettfamilyfh.com

Ralph Dale Armstrong was born on July 8, 1932 in Sasakwa, Oklahoma to Dalton and Retha (Ramsey) Armstrong. On Tuesday, October 8, 2019 he passed away peacefully at Tahlequah City Hospital at the age of 87, his son and daughter by his side as... View Obituary & Service Information

The family of Ralph D Armstrong created this Life Tributes page to make it easy to share your memories.

Send flowers to the Armstrong family.