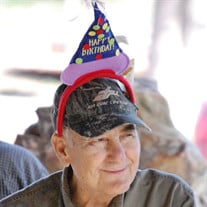 Ralph Eddie Walkingstick, 82, was born March 25, 1933 to Benjamin F. Walkingstick and Juanita (Kirby) Walkingstick in Baron, Oklahoma and peacefully passed away Friday, April 24, 2015 at his home in Hulbert with his loving family by his side. Mr. Walkingstick spent his younger years moving back and forth between California and Oklahoma. He made the final move to Oklahoma in 1948 settling in Westville. He attended and graduated from Westville High School in 1952. After graduating he entered the United States Navy in October of that same year. Ralph attended Air Combat Training and participated in many missions over the Bearing Strait and in Alaska. He was honorably discharged from service in October of 1956, and served in the Navy Reserves until 1960. Ralph met his wife, Dorothy Ellen Hulse of Wheeler, Arkansas on the 4th of July and were married in Fayetteville, Arkansas on January 25, 1957. He started college at Northeastern State University in 1957 and then transferred to the University of Arkansas-Fayetteville in 1960 to enter the engineering program. While working on his engineering degree, he helped design a blueberry picker and other machinery with the horticulture department. He was a member of the Engineering Honor Societies, Pi Tau Sigma and Tau Beta Pi. Upon graduation in 1963, he and his now budding family moved to Dallas, Texas to work with Geo-Technical Corporation as a design engineer. Mr. Walkingstick worked at various corporations throughout his career in Dallas, Tulsa, and Muskogee as well as serving a stint as a Professor at Oklahoma State in Stillwater. Ralph retired as the Chief Engineer from Cherokee Nation Industries in 1999. In 2013, the Cherokee Nation awarded Ralph with the Medal of Patriotism and the Warrior Award for his service to the Navy. He was a story teller extraordinaire and will be missed by many. Ralph was preceded in death by his parents, his brother; Lloyd “Cotton” Sloan, and grandparents. Ralph leaves behind to cherish his memory, his wife of 58 years Dorothy of the home, three daughters; Tamara Walkingstick and husband Jack Gazin of Perryville, AR, Marci Walkingstick and husband Jeff Dixon of Tahlequah, OK, Danita Walkingstick Cox of Tahlequah, OK, son; Sean Walkingstick and wife Joanna (Pardee) of Tahlequah, OK, five granddaughters, two grandsons and two great-granddaughters, one great-grandson, brother and sister-in-law; Ben and Janice Walkingstick of Vinita, OK, sister-in-law; Geraldine Sloan of Siloam Springs, AR, one brother and two sisters in Washington State, and one sister in Pennsylvania, and a host of friends. A visitation will be held for Ralph on Tuesday, April 28, 2015 at the Clifford D Garrett Family Funeral Home in Fort Gibson with the family receiving friends from 5PM-7PM. A service of celebration will be held at 11:30 AM, Wednesday, April 29, 2015 in the Clifford D Garrett Family Funeral Home Chapel with Keith Mings and family presiding. Committal prayers and interment will follow at the Fort Gibson National Cemetery in Fort Gibson, Oklahoma with Justin Walkingstick, Tyler Nipper, Kinley Nipper, Tim Ball, Rob Hulse, Robert Frazier and Jim Tyner serving as casket bearers. The family request donations be made to the Hospice of the Cherokees 1630 N Cedar Ave Tahlequah, OK 74464. The family of Ralph Eddie Walkingstick has entrusted his services and burial to Clifford D Garrett Family Funeral Home 1224 E Poplar/PO Box 1973 Fort Gibson, OK. 918-478-2555.

Ralph Eddie Walkingstick, 82, was born March 25, 1933 to Benjamin F. Walkingstick and Juanita (Kirby) Walkingstick in Baron, Oklahoma and peacefully passed away Friday, April 24, 2015 at his home in Hulbert with his loving family by his side. Mr.... View Obituary & Service Information

The family of Ralph Eddie Walkingstick created this Life Tributes page to make it easy to share your memories.

Send flowers to the Walkingstick family.