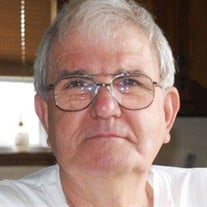 Rev Elby Edgbert (Bert) Thomas, 81, of Ft Gibson, Oklahoma, passed away on 11 November 2021. He was born on 29 May 1940 in Preston, MO, to Russell F. Thomas and Golda I. Wells. Bert graduated from Smith Cotton High School in 1958 in Sedalia, MO. He attended Southwest Baptist College in Bolivar, MO and went on to study Theology and Ministry at Rhema Bible Training Center, Broken Arrow, OK, graduating in 1978. Bert was licensed for ministry in 1960 at Mt Herman Baptist Church in Sedalia, MO, serving the Lord as pastor in Dallas County Missouri beginning in 1961 when he was ordained at Urbana Baptist Church, his own father being on the ordaining council, and subsequently served several churches in Missouri. He pastored Faith Unlimited in Camden, Arkansas after graduating from Rhema and later served as pastor for the ministry church while on the mission field in Quetzaltenango, Guatemala. After returning to the States, he went to Sedalia, Missouri, and pastored Faith Word Center church and school. He continued in ministry for the rest of his life whether in established churches, in private ministry in whatever community in which he resided or ultimately from his chair in his own living room being faithful to his Savior and Friend. After 61 years of service, He never fully retired, but went on expectantly to see Jesus face to face, the fulfillment of his hopes and dreams. Bert met Patricia Sanderson in 1959. They were married July 22, 1961 at Mt. Herman Baptist Church in Sedalia, MO. Together they raised 3 children. Elby is survived by his wife of sixty years, two daughters: Anne (Terry) Rogers and Sara Phillips, and one son: Paul (Pam) Thomas, 8 grandchildren: Brian (Ashley) Bodenhamer, David Bodenhamer, Russell (Addie) Fox, James Phillips, Bethany Phillips, Ashley (Zachary) Taylor, Christopher Thomas, Benjamin Thomas and great grandchildren. He is also survived by 2 sisters: Quetta (Robert) Porter and Faye Ellis, and 2 brothers: Lowell (Linda) Thomas and Benny (Sue) Thomas. He was preceded in death by his parents, 2 great granddaughters: Alana Bodenhamer and Evelyn Bischoff, a sister: Donna Wisdom, and a brother: Russell Thomas. The family has entrusted Clifford D Garrett Family Funeral Home with the arrangements. A Memorial is scheduled for 27 November 2021 at 2:00 PM at Olive Point Baptist Church 20914 CR 421, Preston, MO 65732. Rev Mark Gooden will officiate the memorial service celebrating a life well lived.

Rev Elby Edgbert (Bert) Thomas, 81, of Ft Gibson, Oklahoma, passed away on 11 November 2021. He was born on 29 May 1940 in Preston, MO, to Russell F. Thomas and Golda I. Wells. Bert graduated from Smith Cotton High School in 1958 in Sedalia,... View Obituary & Service Information

The family of Reverend Elby Edgbert 'Bert' Thomas created this Life Tributes page to make it easy to share your memories.

Send flowers to the Thomas family.