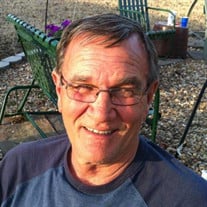 Robert Leon Strain, Sr., age 74, peacefully passed away at home into the arms of Jesus on February 18th. Leon is survived by his wife, Janet "Princess" Strain and Sweetie, his faithful Dachshund friend, both of the home; children, Robert Leon Strain, Jr. (Glenda) of McAlester, OK; Kim Kash (Curtis) of Enterprise, OK; and their mother, Vonda Underwood of Howe, OK. Justin Arnett (Cristin) of Fort Gibson, OK; and Jenna Ray of Portland, OR. Grandchildren, Kara Daniels (Clay), Lauren Fulkerson (Dylan), Lauren's mother, Amy Giaudrone, Matthew Kash, Ethan Kirkland, Jolee Ray, and her dad Matt, and Justin "Micheal" Arnett, Jr. great-granddaughter, Olivia Fulkerson; Siblings, Barbara Corbitt (Dick), Charlotte Burns, Delvina Padgett (Jimmy), Debbie Smith, HB Smith (Lisa), and Kay Bruce (Ted); and sister in laws, Janean Inge (Maurice), and Linda Shelton; and a brother in law, Red Shelton. Leon was preceded in death by Grandparents, Bill and Rena Strain; Mother, Nellie Strain; mothers-in-law, Lavonna Sharp and Joyce Dillingham; and grandmother-in-law, Sally Phipps Whiteside. Leon was born in Quinton, OK and attended school at Quinton Schools, where he graduated. He participated in basketball and was the captain of the football team. He married Vonda Phipps when he was 17 years old. They were blessed with two children, "Butch" and Kim. He had a bonus son he loved just like a son, Curtis Kash, Kim's husband. He helped raise and love Vonda's nephews and niece, Ray, Eddy, and Tonja Shelton. He had several jobs, but his career of almost 30 years was working in cable tv. He served many positions over the years and retired as a Field Quality Control Manager at age 70. He won the only Employee of the Year award ever given in the Fort Gibson office. May 13th, 2000, he married Janet Dillingham Arnett and made his home in Fort Gibson, OK. They were married for twenty years and never had a single fight and never raised their voices to one another. Leon was baptized into the Lord's church and served faithfully in the Fort Gibson Church of Christ. He enjoyed serving quietly in the background, maintaining the baptistry, and helping the Rough Riders maintain the church grounds. He was always happy to be at Janet's side assisting in all of the children's Bible classes, activities, and parties she would plan. He did it not only to help Janet, but to enjoy seeing the children learn about Christ and have a good time. He loved all children and took an interest in each one. He was an encourager of whatever they were doing and had a gift of communicating with the children because he listened and genuinely cared. He could often be seen in the red van taking children to church who didn’t have a ride. He has been lovingly referred to as Dad, Daddy, Brother, Papa, Poppy, Uncle Leon, Uncle Earl, Mr. Leon, Goliath, Lee, Leona, and Buddy. Leon perhaps entertained angels because he often opened his home to people who needed a temporary home or just needed love. He would joke that he had a revolving front door. His warm spirit was always welcoming. He enjoyed going to grandkids' events. He took pride in his relaxing back yard. He enjoyed playing horseshoes, going to Men’s GROW class, and to his Connect Group meetings. His kind and gentle ways served as an example to all who knew him. He was a man of integrity and loved to help others. He was the first to admit his mistakes and prayed each night to be better tomorrow than today. As his health failed, he looked forward to calls from his siblings, who remembered him often. Everyone from the family, friends, to church family, would show up with acts of kindness or send reminders that he was loved. He was always overwhelmed and appreciated each one. He leaves a legacy of faith in Jesus Christ, genuine humility, a servant heart, and a positive outlook. He will be missed by all who knew him. A celebration of Leon’s life will be held 1PM Tuesday, February 23, 2021 at the Fort Gibson Church of Christ with Minister Dan Rouse and Terry Hackwork officiating. Those unable to attend may view services online at the Fort Gibson Church of Christ Youtube channel. In lieu of flowers, memorial contributions may be made in Leon's name to the Fort Gibson Church of Christ Youth Ministry @ PO Box 787 Fort Gibson, OK 74434. The family of Robert Leon Strain has entrusted his care, services and cremation to Clifford D Garrett Family Funeral Home, Fort Gibson. 918-478-2555. Online condolences may be left for the family at clifforddgarrettfamilyfh.com

Robert Leon Strain, Sr., age 74, peacefully passed away at home into the arms of Jesus on February 18th. Leon is survived by his wife, Janet "Princess" Strain and Sweetie, his faithful Dachshund friend, both of the home; children, Robert Leon... View Obituary & Service Information

The family of Robert Leon Strain, Sr. created this Life Tributes page to make it easy to share your memories.