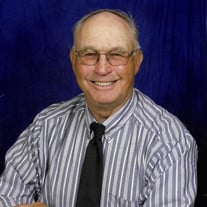 Not sure what to send?

Ronald Christian Boelter, age 89, passed away December 10, 2021. Ronald was born March 29, 1932. He was born in Knox County, Nebraska, between Verdigre and Orchard. Ronald grew up on a ranch 24 miles northeast of O’Neill. He graduated from Crofton High School in 1952. He lived there until he was 20 years old. While growing up, he enjoyed hunting, fishing, trapping and chasing coyotes. On March 1, 1952, he joined the United States Air Force. He enjoyed active duty for two years in Texas, New Mexico, Nevada, California and two years in Alaska. He also served four years active reserve at Lincoln Air Force Base in Nebraska. He was united in marriage to Berniece Caroline Grande on June 23, 1958. They were married for 45 years until her death in 2003. He attended any college he was close to from 1952 through 1959. For four years, he taught school at Philip, South Dakota. Then moved to Sundance, Wyoming where he taught for two years. In 1963, he moved to Niobrara, Nebraska for three years. In 1968, he took a teaching job in Lyons, Nebraska where he stayed for ten years. In 1978, he moved to Todd County, South Dakota where he taught school until he retired in 1997. He taught school for 38 years. During his years of teaching, he attended college and picked up an additional five years of credit for endorsements, certifications and degrees. Ron will be remembered for his recycling business he ran from his backyard in Mission, South Dakota. He bought and sold precious metals part time from 1980 through 1997 and from 1998 through 2013, he was full-time. Ron will be remembered most for his love for his dogs and hunting. He was an avid coyote hunter. He raised hundreds of dogs and sold them all over the Country. The tale of the hunt around the kitchen table will be missed. Ronald is survived by his daughters, Debbie Taylor of Lyons, Nebraska and Veronica Svendsen and husband Rob of Coweta, Oklahoma; son, Edwin of Judd, North Dakota; 10 grandchildren; 36 great-grandchildren, and 18 great-great-grandchildren. He is survived by two brothers, Woody Boelter and wife Nola of Gayville, South Dakota and Gene Boelter and his wife Vicky of Alta, Iowa; many nieces, nephews, friends and family. He is preceded in death by his wife, Berniece; mother, Linda Cross; stepfather, Frank Cross; father, Homer Boelter; and two brothers, Freeman Boelter of Crofton, Nebraska and Virgil Boelter of Billings, Montana. This obituary was prepared by Ronald Boelter and beautifully written by his daughter, Veronica Svendsen. Memorial services will be held 10:30 Saturday, March 26, 2022, at Stonacek Funeral Chapel in Norfolk, Nebraska. The family of Ronald Boelter has entrusted his care and cremation to Clifford D Garrett Family Funeral Home, Fort Gibson, OK. 918-478-2555. Online condolences may be left for the family at clifforddgarrettfamilyfh.com

Ronald Christian Boelter, age 89, passed away December 10, 2021. Ronald was born March 29, 1932. He was born in Knox County, Nebraska, between Verdigre and Orchard. Ronald grew up on a ranch 24 miles northeast of O&#8217;Neill. He graduated... View Obituary & Service Information

The family of Ronald C. Boelter created this Life Tributes page to make it easy to share your memories.