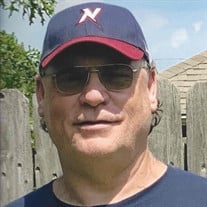 Ronnie Dale Ellis, 60, of Fort Gibson, OK was born October 18, 1961, in Marysville, CA to Senior Master Sergeant Alva and Margaret (Van Zandt) Ellis and passed away Thursday, February 17, 2022, in Muskogee, OK. Ronnie received his formal education and graduated from Muskogee High School in Muskogee, OK. He later worked for and retired from Anheuser-Busch in 2003. Ronnie was very thankful for his job as a Delivery Driver for Budweiser. Ronnie was a man among men enjoying all sports from football to NASCAR. He held a tight grip on his youth by playing games on his PC. Ronnie, his sons, Jeremy, Christopher and Collin along with his brother, Leroy would play games for hours, while Ronnie watched football on a separate monitor close by. When the monitors where off, he would spend time with his grandchildren, rolling around and wrestling with them on the floor. Ronnie was always quick to give you a hard time if you slipped up. His quasi-cantankerous banter with family and friends will never be forgotten. Ronnie is lovingly survived by Vivian Ellis of the home; two sons, Jeremy Ellis of Bentonville, AR and Christopher Ellis and wife, Violet of Welling, OK; five daughters, Jennifer Boyett and husband, Collin of Bixby, OK, Christina Williams of Fort Gibson, Cheryl Peal of Fort Gibson, Angela Moore of Vian, OK and Cynthia Johnson and husband, Jeff of Fort Gibson; five brothers, Glenn Ellis and wife, Barbara of Kuna, ID, Larry Ellis and wife, Brinda of Marysville, CA, Gene Ellis and wife, Michelle of Muskogee, OK, David Ellis of Muskogee, OK and Leroy Ellis of Bentonville, AR; three sisters, Kathy Frost of Fort Gibson, Loretta Steele and husband, Larry of Muskogee, and Susan Pilgrim of Sacramento, CA; numerous grandchildren, great-grandchildren, nieces, nephews and many friends. He was preceded in death by his parents and his brother-in-law, Jack Frost. A graveside service celebrating Ronnie’s life will be 1:00PM, Tuesday, March 1, 2022, at South Bethel Cemetery in Braggs, OK with Mr. Brad Smythe officiating. The family of Ronnie Dale Ellis has entrusted his care, cremation and service to Clifford D Garrett Family Funeral Home, Fort Gibson, OK. 918-478-2555. Online condolences may be left for the family at clifforddgarrettfamilyfh.com

The family of Ronnie Dale Ellis created this Life Tributes page to make it easy to share your memories.

Send flowers to the Ellis family.