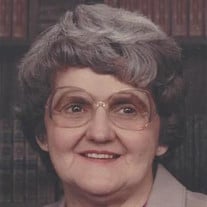 Rose Lamar Guthrie was born in Sequoyah County, Oklahoma on October 17, 1924 as Rose Lamar Jones to Marjorie May and Will Lamar Jones. She grew up in Tulsa until her senior year when her parents re-located and she graduated from Muskogee Central High School in 1941. She attended OSU (at that time it was Oklahoma A & M) graduating with a Master’s in Chemistry and Biology, where she used this education to become Board Certified in Medical Technology. She did her internship in Detroit and took her first job as a Medical Technologist at the Los Angeles County Hospital. It was here where she met and married Charles Grady Phillips and they had 2 children. She then relocated back to Muskogee and worked at the Muskogee General Hospital (now known as Saint Francis Hospital – Muskogee) for 35+ years as Head of the Blood Bank. In 1979 she married Calvin Guthrie and moved to Fort Gibson. In 1989-90 she retired and spent her time traveling & volunteering at the First United Methodist Church of Fort Gibson and NSU library in the genealogy section. She loved her family and her heritage and was active in the Fort Gibson Historical Society with her best friend, Marsha Elliott. She wrote a book and many articles focusing on a Historical look at Fort Gibson. She always had a kind word for others around her and would take a back seat if it meant she could help out someone in need. She loved people whether it was playing bridge at her bridge club of 40 years, attending a social function at the church or just talking with someone she met at the doctor’s waiting room. She was a researcher and collector and sought items that reflected either the Native American or Oklahoma history. A perfect day for her would be to wake up early sit on the porch with her coffee and newspaper enjoying the first moments of the day with her country home view of the hills. She was a wise women. She was a good listener, teacher, mother, grandmother and never turned down the opportunity to extend a hand to someone in need. She was the backbone of her family and taught her children/grandchildren to love and have faith in the Lord, follow his path and live by the golden rule. Rose Lamar Guthrie was preceded in death by; Calvin Guthrie and Charles Phillips. She is survived by a daughter; Lisa Butikofer and husband Lynn; stepson, Steve Guthrie; grandchildren, Jennifer Rothlien, Jamie Berry and Benjamin Butikofer; great grandchildren, Jalyn Berry, Brennen Berry, Trey Berry, Jackson Rothlien and Adler Rothlien. A family conducted memorial service will be held, 1:00PM Tuesday, October 10, 2017 at First United Methodist Church, 302 Beauregard Street, Fort Gibson, OK. The family of Rose Lamar Guthrie has entrusted her cremation to Clifford D Garrett Family Funeral Home and Cremation Service, Fort Gibson, OK 918-478-2555 Online condolences may be left at clifforddgarrettfamilyfh.com

Rose Lamar Guthrie was born in Sequoyah County, Oklahoma on October 17, 1924 as Rose Lamar Jones to Marjorie May and Will Lamar Jones. She grew up in Tulsa until her senior year when her parents re-located and she graduated from Muskogee Central... View Obituary & Service Information

The family of Rose Lamar Guthrie created this Life Tributes page to make it easy to share your memories.

Send flowers to the Guthrie family.