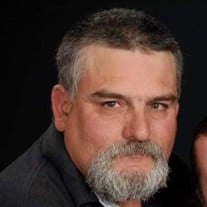 Ruben Ray Kisner, 52, of Fort Gibson, was born February 2, 1969 in Springdale, Arkansas to Homer George Kisner, Sr. and Rosie Mae (Taylor) Kisner and peacefully passed away Monday, October 4, 2021 in Muskogee. He lived in Fort Gibson most of his life. Ruben received his formal education in the Fort Gibson School System. Ruben met and later married the love of his life, Gearldene Colston, on April 10, 1991 in Muskogee. Together, they spent thirty years, five months and twenty-four days making precious memories together. He will be truly missed by all that knew him. Ruben worked for the Town of Fort Gibson as a Utility Laborer for thirty years. He could tell you anything you wanted to know about the town and its waterlines. In his younger days, he found a love for trains and loud engines. One of his greatest gifts he received growing up was a train set, which he spent the whole night playing with it. That love later developed into a love for motorcycles, which carried on through his adult years. Some special memories he had growing up were spent with his brothers and sisters. One summer he helped Homer build a house, with the help of a few siblings he held Sue down and put soap in her mouth, going trick or treating with Lynn on her wedding night, the time he locked his twin, Raymond, out of the house when he went to Vo-Tech and the time he spent with Carl and Pat in Arkansas. Ruben was an active member in the Christian Motorcycle Association, which he took great pride in. His love for Christ began when he was 11 years old and his mom bought him his first Bible with green stamps. Ruben was a member of the Fort Gibson Church of Christ for many years. He loved being outdoors and enjoyed hunting and fishing because it gave him time to talk to God. Ruben enjoyed spending time with his family and friends. He loved helping others and went out of his way to help anyone. Those left to cherish his memory are his wife, Gearldene of the home; daughter, Sertha Riggs and husband, Justin of Muskogee, OK; sons, Archie Kisner and wife, Samantha of Muskogee, OK; and Patrick Kisner and wife, Mary of Fort Gibson, OK; brothers, Homer Kisner, Jr. and wife, Kathy of DeFuniak, FL; Carl Kisner and wife, Doris of Springdale, AR; and twin brother, Raymond Kisner and wife, Kim of Benton, KY; sisters, Sue Hall of Muskogee, OK; Pat Ross of Grand Rivers, KY; and Lynn Tapp of Muskogee, OK; grandchildren, Adam, Hannah, Eli Kisner and Rayden Riggs, all of Muskogee, OK; Cody, Kyler and Rosie Kisner, all of Fort Gibson, OK; nieces, nephews, extended family and many friends. Ruben was preceded in death by his parents, Homer and Rosie Taylor. A visitation will be Monday, October 11, 2021 from 5:00PM-7:00PM at Clifford D Garrett Family Funeral Home in Fort Gibson, OK. A Celebration of Ruben’s life will be held 10:00AM Tuesday, October 12, 2021 at Citizens Cemetery Pavilion in Fort Gibson, OK with Terry Presley officiating. Archie Kisner, Patrick Kisner, Chuck Jones, Dean Colston, Archie Colston and Justin Riggs will serve as casket bearers. Honorary casket bearers are Homer Kisner, Jr., Carl Kisner and twin brother, Raymond Kisner. In lieu of flowers, please bring a toy for Ruben's Toy Drive to the service at the cemetery. The family of Ruben Ray Kisner has entrusted his care, service and burial to Clifford D Garrett Family Funeral Home, Fort Gibson. 918-478-2555. Online condolences may be left for the family at clifforddgarrettfamilyfh.com

The family of Ruben Ray Kisner created this Life Tributes page to make it easy to share your memories.

Send flowers to the Kisner family.