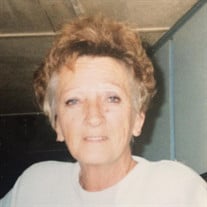 Ruby Anna Betts, age 81, entered heavens gates on Tuesday, May 17, 2016. Ruby passed away at her home surrounded by her loving family. She was born February 7th, 1935 in Toledo, Oregon. Ruby was the daughter of the late Freeman R. Marr and Luria V. (Gordon) Marr. She married the late Ronald (Ron) C. Betts on September 23, 1952. Ruby is survived by her Children Howard A. (Art) Betts, Ronnie (Ron) F. Betts, George J. Betts, Ruthie (Ruth) A. Betts and Luria T. Ramey, her grandchildren Artie Potter, David A. Betts, Jesse R. Betts, Douglas G. Martin, Ronnie F. Betts, Ginger A. Betts, Jennifer R. Betts, Crystal N. McGehee, Shera D. Betts, Jesse G. Betts, Cyril G. Hopes, Myles J. Snow, Teresa V. Bresee and numerous great grandchildren, her brother, Sonny Marr, and numerous nieces and nephews. She was preceded in death by her husband, Ronald (Ron) C. Betts, her daughter Ruby A. Reese, her parents Freeman R. Marr and Luria V. (Gordon) Marr, her brothers Gene Marr and Frank (Bud) Marr and her grandson Robert A. Reese. Ruby was extremely proud of working with children born with birth defects such as spina bifida at the Mayo Hospital in her younger years and loved working at Goodwill after her six children were old enough for her to go back to work. Ruby loved being a mother and raising her six children, she was a true home maker. Ruby loved traveling with her military husband and her children while being stationed at various locations throughout the United States. Some of her favorite places were Alaska, Colorado, Montana, Wyoming and Washington D.C. as these were the states where her children were born. She also loved her home state of Oregon and her husband’s home state of New Jersey. In her younger years Ruby helped her husband with rebuilding hot rods and mechanical work. She had the honor of being the trophy queen several times while her husband participated in races. She always had a Miss America waive that her children found endearing. Ruby loved animals and spent many years raising German Shepherds. She always had a pet close to her heart. Her last pet was a little gray poodle named Molly who is now 15 years old and missing her mommy. Ruby loved flowers and always had a beautiful flower garden and yard throughout her life. She had so many flowers that most neighbors called her the flower lady. Ruby loved being out in the sun and getting a tan. She loved walking on the beach and picking up seashells in both Oregon and Florida. She loved fishing with her husband and going to clubs to hear him play his saxophone. Ruby loved dancing while her husband was playing music. Ruby also loved Elvis Presley and had a lot of Elvis music and Memorabilia. Ruby loved being around her grandchildren and having family cook outs on holidays and whenever possible. She was not afraid to work on her own car and tinker with appliances that needed repairs. Ruby had a lot of life experience and wisdom and wasn’t afraid to do anything. She wasn’t afraid to voice her opinion while always keeping a good attitude towards everything. Ruby loved to just sit drinking coffee and chatting with people. She was always happiest when people were around and people just loved her. A private family service will be held at her home. The family of Ruby Anna Betts has entrusted her cremation to Clifford D Garrett Family Funeral Home and Cremation Service, 1224 E Poplar/PO Box 1973, Fort Gibson, OK 74434 (918) 478-2555 You may share online condolences with the Betts family @ clifforddgarrettfamilyfh.com

Ruby Anna Betts, age 81, entered heavens gates on Tuesday, May 17, 2016. Ruby passed away at her home surrounded by her loving family. She was born February 7th, 1935 in Toledo, Oregon. Ruby was the daughter of the late Freeman R. Marr and Luria... View Obituary & Service Information

The family of Ruby Anna Betts created this Life Tributes page to make it easy to share your memories.

Send flowers to the Betts family.